When everyone else around me was backing away, he showed up, pulled me in, and taught me how to be happy.


The main thing that I remember about the night before I met Ryan is running. Bolting out of the front door of my house and taking off down the street. Running away from my mother’s voice trying to call me back. Running away from all of my problems. Attempting to run so far, so fast that I would leave behind the girl that so many people were pressuring me to be. But my running was forced to end when I noticed the moons reflection on something. Water. I had come to a pond. The pond where I had spent summers of my childhood. But now this place was not one for enjoyment but an escape. I kick off my shoes and throw myself into it. The chill was shocking at first, but after a while I began to feel my body relax. I floated on my back and stared up at the sky thinking of a simpler time. Sometime later on, I crawled up under a giant oak tree, curled up into a ball, and drifted off to sleep, feeling who I should be only hanging on by a thread.

“I don’t know, but she might have gotten mauled by a bear of something. You never know…….” I could feel myself slowly waking up. At first I thought that I was still dreaming when I heard the voices. But soon after I began to realize that there were other people around me. This thought became concrete when I felt a strong hand on my shoulder.

“Hello?” It was a boy. Leave me alone, I thought. This is my escape. Why are you even here?

“No she’s definitely breathing.” My eyes fluttered open and I saw two teenage boys hovering over me. “See Jake, she’s alive.” I tried to sit up and was overcome by dizziness.

“Whoa there.” The boy name Ryan grabbed onto my arms to keep me from tipping over backwards. He was beautiful. I rubbed my eyes, and tried to remember how I ended up here. Suddenly I remembered the running. The floating. The sleeping.

I pulled my hands away from my face and looked over to him.

“No problem, I mean helping you from falling down is better than having to call the police because there’s a dead girl in the woods.” He smiled.

“Yeah, I guess there’s always something better than that.” Maybe this was going to be the point that my life turned around, and took a turn for the better.

“Um Ryan? It’s almost noon. I told my mom that I would be home by then. Do you need a ride?” Ryan turned to look at Jake and shook his head no. What did that mean? My heart is pounding so loud that I’m sure that the entire world can hear it.

“I’m going to stay here and make sure that she stays un-dead.” He looked back at me and smiled.

“Okay,” said Jake as he walked in the direction of the road which was hidden by trees. When he disappeared, Ryan looked at me.

“Well considering that you couldn’t sit up without almost falling over, I’m walking you home.” Seeing that there was no reason to argue, I shrugged and started standing up. “Do you need help?” he asked, already standing up himself. I opened my mouth to answer when his hands were around mine pulling me up. The next thing that I knew, I was standing on my feet across from him.

“Thanks.” I laughed. He was taller than I would have thought. And bigger. He obviously played sports. This thought caused my heart to sink. If he plays sports and looks like that, he probably has a girlfriend.

“So, you probably already got that I’m Ryan. What’s your name?”

“Katie.” We started walking through the trees.

“Okay Katie, so do you usually spend your time sleeping by ponds?”

I laughed. “Yes. I sleep by this pond at least once a week.”

“Oh really. Maybe I’ll have to try that sometime.”

“Maybe,” I said. We walked in silence for awhile, when he suddenly stopped.

“Are you sure that you know where you are going? Because right now I’m kind of debating on whether or not you are crazy.” He smiled at me. I hadn’t felt woozy again until now. I smiled back at him.

“I’m not crazy. We’re going to my house. I would know where it is.”

“Maybe, maybe not. You could just think that you have a house when in reality you are just a crazy girl who lives by that pond.”

“Okay,” he said playfully rolling his eyes. “Well if you don’t live in the forest, where do you go to school?”

“Really?” Again he looked at me like I was crazy. I laughed.

“I go to Marriot High too, and I’m a senior. Why haven’t I seen you before?”

“Well, my family and I just moved back here about four months ago, in May. We lived here until I was ten though.”

“Hmm I don’t think I remember you.”

“Well, I was quite the little nerd back then.”

“Somehow I don’t believe that.” My heart began to pick up its rhythm again. What does that mean? I glanced over at him and saw that he was blushing, so I quickly looked away.

He cleared his throat. “So how did you end up at the pond last night?”

“Yes. It’s not that far though. My house is right there.” I pointed toward where the brown roof of my house was coming into view. We walked in silence up the front stairs and onto the porch. I stopped and turned to face him.

“So thanks for not just accepting that I might have been dead.” He laughed.

“Hey it’s no big deal. I’ve pretty much always been known for my humanitarianism.” I smiled. “It was really nice meeting you Katie. I hope to see you around school on Monday.”

“Me too. Bye Ryan.” I opened the front door and smiled at him one more time and walked inside. Once the door was shut I leaned my back against it and sighed. Maybe my life was going to get better after all. 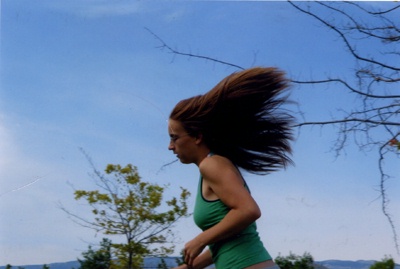 The author's comments:
This is just the beginning. I'm planning on adding more to it.
Post a comment
Submit your own

Kayly SILVER said...
on Dec. 22 2010 at 10:27 pm
Kayly SILVER, Helena, Montana
5 articles 0 photos 3 comments
View profile
Thanks!!! I just finished two more chapters but I submitted it as a novel under the same title if you want to read more :)
Peanut:) said...
on Dec. 20 2010 at 12:13 am
OHHMYGOSH(: PLease write more! This was precious. And your writing was great, not to much, not to little. Left me wanting more, and I could actually read through the whole thing! Unlike so many other articles on here. Nice job!