The day was gloomy, dark gray clouds littered the sky in the neutral territory. The roads and sidewalks caked with ice and puddles of snow as Lyana walked down to her destination. She walked carefully to miss the thick ice and snow, barely avoiding running into passerbys. Moving along until she came crashing into what she believed was a lamp post, feeling humiliated she looked up to curse the post, only to meet a pair of deep purple eyes. A demon. The chill that raked down her spine was enough for her to remain planted on the cold ground.

“Are you going to get up or remain in the way?” he growled out, annoyed by the small woman. He had seen her coming but expected her to steer away from his aura that pooled around any demon. When she hadn’t he felt the need to knock her out of whatever make believe world she’d been lost in, Angels always getting side tracked by stupid imaginations, he thought bitterly staring at her. This was what knocked her out of her fearful trance, she glared at him as she picked herself up off the ground.

“If you would have just moved out of the way I wouldn’t have run into you,” she responded annoyed.

“Why would I move for a small angel like you? If anything you should be begging forgiveness for running into me.”

This angered Lyana, how dare this idiotic demon tell her to beg forgiveness from him when she had done nothing wrong. Outraged by his words she quickly side stepped him and entered a small cafe not far from where they collided. Her annoyance grew when her boss lectured her about being late, again. She spent the rest of her shift thinking about the rude demon with deep purple eyes. When she exited the cafe that night she didn’t expect for the purple eyed demon to be sitting on the bench in front of the establishment.

“Well little angel, where are we off to now?” he asked with a mocking grin.

“We are going nowhere, and don’t call me ‘little angel’ I have a name,” she bit back before starting her trek home. He had followed behind her until she reached her home before asking,

“What is your name then little angel?”

“Lyana,” she responded quickly before she shut her door in his face.

After a while of this process of them running into one another and him following her home, the couple grew closer. Lyana had found that her mystery purple eyed demon was called Felix. They had grown close, he would walk with her to the cafe then meet her again at the end of the day. They would go to movies and the cafe together on a daily basis. It was a never ending cycle of Felix pestering Lyana until she gave up on whatever she was doing and talked to him. Months of learning more about one another and bothering the other for attention. Eventually he had asked her to date him, this concerned her.

“We can’t be together you know that Felix,” she had glanced around at the people around them in the street when he mentioned them dating. Dating between demons and angels was forbidden, the last case Lyana knew of ended in both parties being executed for treason. They were never allowed to be together, the previous leaders feared the idea of the mixing. They had thought that the children would be too much to handle, to much power that could pose a threat to the whole system. So they made the law that would keep the demons and angels apart, each side would teach their youth the ‘horrors’ of the opposite kind.

“What they don’t know won’t kill them, Lyana, besides it’s not like we are very high in the hierarchy.”

After she had given thought to it she agreed but only if he promised that if they were caught he wouldn’t ditch and run without her. She did not want to face the wrath of her leader alone, at least with him by her side she would be able to face them with more dignity knowing she went down for a good cause. They had continued to grow closer by the day oblivious to the looks they would receive from the other angels and demons scattered amongst the humans that live in the neutral territories.

Until that one fateful day they were both summoned to their respective leaders, someone had finally reported them for their relationship. Immediately they rushed to one another homes, packing a bag of belongings each before meeting at the train station so they could flee the country together. Felix had waited for her for hours until he figured out what had happened. Lyana had been taken to her leader, alone, without him. Remembering his promise he rushed to find the angels holding his angel captive, not caring about the laws he broke travelling onto Angel territories.

“Let Lyana go!” he yelled as he burst through the doors of the angels capitol building, fighting with the guards from outside the door.

“You demon have no right to be on this land, this can easily be seen as an act of war,” the leader retorted to Felix’s shout. “Besides, what use can a demon have for a lower class angel anyways? Relationships between the two are strongly forbidden by both sides.”

Felix had heard of the angel leader Xentress, the other demons referred to her as a witch in an angel skin. He could now understand why. This woman did not care what happened to her citizens, they were all beneath her.

“Don’t you think that law is outdated?” he responded after the guards left him be. “We live in a time of age that we shouldn’t be feuding like children, we should be able to love who we want!”

“How do you plan to achieve that? All you demons do is play on the innocent and pure nature of my kind. You make us toys as if we do not have feelings,” Xentress responded in anger at the young demon before her.

“We are not all like that! How dare you compare all of us to a select few, we have feelings just like you. I do not know what experience you’ve had with love but heartbreak is a part of finding your soulmate, how do you expect us to find our true love if we can’t even try to find them?” he questioned, his voice cracking from emotion. The thought of losing Lyana had finally hit him, What if I’m too late? The thought made him falter, his strong facade breaking at the thought of losing his little angel.

“I would rather protect my people from the pain you bring than allow them to march blindly into a demon's arms. I have made that mistake I will not allow my people to hurt the same way I did.” she responded, not meeting his eyes.

“Your people hurt more when they die alone, all anyone wants is someone to grow old with and make memories with.” He could see the remorse in her eyes, he needed her to see that what she was doing was wrong for her people and his too. The more they deliberated the more he saw Xentress leaning to disband the law, when she told the guards to bring Lyana into the room he knew he had won. Now they only needed to convenience his leader Cess to join their side.

Convincing Cess took less than Felix thought, though he believed Cess had his reasons as he fled the room once their discussion was over. Later they found that Cess had been seeing an angel that was higher up in the hierarchy and was relieved he did not have to hide his emotions anymore.

The movement met a few protests like any change would. However, it seemed angels and demons were coming together and being more friendly toward one another as time went on. The cities were filled with angels and demons, the streets flooded with young couples, and  the leaders living out their life happy knowing that they could bring this change for their people. As for Lyana and Felix, they had chosen to live together in the neutral territory two years after the laws were changed, and proceed to get married soon after moving in together. They would then live the rest of their lives in peace and making memories together they would never forget. 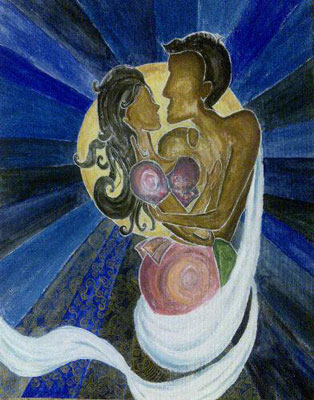