Maddie’s eyes popped open and she sprang immediately off her bed, smiling. “Ready or not, here I come!” she yelled. She looked around her room hurriedly, scanning all the little nooks and crannies for any sign of a long, scaled tail, or maybe the glint of a sharp, curved claw. But nothing stood out to her in the room. She would have to look elsewhere to find her companion and win the game of hide-and-seek!

Maddie slipped out of her room and ran down the hallway to her brother’s room, ignoring his indignant cries and opening his closet doors to peek inside. “Nothing,” she muttered, slamming the doors closed and whirling around to check the rest of the room. “Mo-om!” Andrew called, and Maddie took that as a signal to move on. She decided to visit the guest room next.
After searching the guest room, her parents’ room, and the linen closet, she was beginning to doubt whether she had searched the rooms thoroughly enough. She and her buddy Mingo had agreed to only hide on the upper floor of the house, so that the seeker wouldn’t have to look forever. She knew Mingo wouldn’t break his promise; he was very trustworthy. But then she remembered the last place to check: the bathroom.
She flicked on the lights and surveyed the sink carefully, turning on the water to make sure Mingo hadn’t plugged himself in the faucet. He’d done that once before, and fooled Maddie for almost an hour before her mother made her wash her hands from touching a lot of gross things in her search. Now, she wasn’t going to be tricked again! But there was nothing in the faucet, and she would have to look further.
She slid all the drawers open underneath the sink and slammed them all shut again, finding nothing. Maddie was beginning to get impatient, being the 6-year-old that she was. Frustrated, she threw the bathroom cupboard doors open- and he was right there! Little Mingo was curled up next to her toothbrush and her other toiletries, seemingly fast asleep. She groaned at how obvious it was. If only she had checked the bathroom sooner–!
The pygmy dragon blinked open his lovely purple eyes and stared at her innocently, his reptilian mouth curling into a smile. You found me! he congratulated Maddie telepathically. Good job, I was beginning to think you’d given up! He unwound his snakelike body and stretched, his scales glittering with metallic colors of the rainbow. His wings fluttered at his sides, one like a bird’s and one like a butterfly’s.
“You should have chosen an easy place to hide, it’s not fair!” Maddie reprimanded the dragon loudly. But she allowed him to crawl around her shoulders, stroking his head affectionately. Mingo purred and nestled closer to her, curling and uncurling his silver claws. His long tail, twice the size of his body, curled around and around her neck like a scarf.
There was a knock at the door and Maddie turned, her dragon repositioning himself with the sudden movement. Her mother was standing in the doorway, her arms crossed, with an annoyed expression. “Honey, you’re not playing games with your dragon friend again, are you?” She asked, raising an eyebrow. Maddie shared a sheepish glance with her pet and looked down, tracing a circle in the tile with one foot.
“Sorry,” she mumbled to the floor.
“You know we don’t like it when you just come into our rooms like that, with no explanation for why you’re searching through our closets.”
“Mingo and I– we were just having some fun! You guys are boring, you never want to play,” Maddie accused, her lower lip protruding in a pout. At her shoulder, the dragon nodded in agreement. “Mingo thinks so too,” she argued, glaring at her mother, who frowned, looking at blankly at the dragon as if he weren’t there.
“Maddie… just maybe let us know the next time you’re going to come in our rooms? Ask us permission first?” she asked. Maddie nodded emphatically, pretending to be serious. But her thoughts were on complaining to Mingo once they were alone again.
“Okay, then. How about an afternoon nap?”
“Mom, no! I want to play more with Mingo!”
“I think a nap would be good for you, to calm you down.” Her mother was just unbearable! Maddie stamped a foot lightly in irritation, but allowed her mother to guide her to her bed, grumbling all the way. She was tucked in, the lights were turned off, and the door was soon closed. But as soon as the footsteps faded away, the covers were off and Maddie sat up in bed, taking Mingo in her arms. He snuggled down in her lap, laying his head on her leg and staring up at her, waiting for her to voice her dissatisfaction.
“She’s just so, so. . . annoying!” The girl began her rant, of course going on and on about all the things she disliked about her mother. Mingo listened patiently, though he had heard the speech a hundred times. When she finally found herself struggling for more complaints, he piped in, eternally optimistic.
At least we got to play a few games before Mom stopped us, he reminded her, gazing at her sympathetically. And I had lots of fun! Didn’t you? Maddie sighed and nodded, half smiling. “Yeah,” she relented. It was silent for a few moments as Maddie heard her mother walking past in the hallway and threw herself under the covers, hugging Mingo to her chest like a stuffed animal. But the steps continued past her room to her brother’s, and she breathed a sigh of relief. She remained still under the covers, so as not to alert her mother to any movement.
“Thanks for playing with me, Mingo,” she whispered to the dragon, stuffed under the sheets. He wriggled out carefully until his head popped into view. You’re welcome, thanks for playing with me too, he returned. Maddie kissed his little head with the simple love of a child and lay back on her pillow, Mingo curled in the crook of her elbow. Soon her breathing deepened and evened out, signs that she had fallen asleep.
Good night, Mingo smiled, and closed his eyes blissfully. 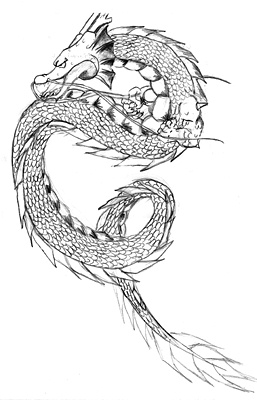