I kept Rope in a tattered brown shoebox at the back of our closet. At the time, that was the only right place for it to go. Nestled among other anonymous containers; secreted away in plain view.

Today I was looking for that pair of black heels I used to wear when we went dancing. Sometimes I get scared that all of those old kinds of things have been sifted out during spring cleaning and the times I have to run a vacuum into the corners. I climbed all the way to the back wall, behind the coats. The row of boxes confronted me there. You know that I don’t keep shoes in the back. I knew it too, but I kept searching.
There was a point where I thought about clambering out, but then I realized that all the time I had known which box Rope was in. Somehow I was keeping track of it as I turned around, mincing through the piles we’ve built up back there. That’s how the old brown thing ended up right in front of me.

I opened the lid and it tore off in my hands. (We’ll find the scrap of cardboard later. Maybe we’ll laugh because we know just what it is.)

We were never afraid of it falling apart, but Rope finally did, hidden away in a box in the closet. It was a tangled fray of blue strings.
We’re lucky, really, because she would have hated to see it unwind herself. Remember how she used to shake that thing so hard her ears would whip around her head? She always liked to play the fearsome hunter, gnawing and twisting and flinging Rope in the air. But then she would ruin it by prancing up to us, so proud of catching her prey, with her tail swinging. Too happy to be anything but what she was.
Gathering up the box, I cradled it to me as I went to the garage to find a shovel, and then out back to the garden. You were the one who picked the daisies weren’t you? Because you let me choose her stone. I wound my way through the stems until I was standing with one foot on either side of the granite slab, my weight centered directly over her name. To the right, I began digging.
This is where Rope should have gone from the very beginning, beside her in the ground. You understand, though, what it was like in those first days after, clawing and clutching at all the things that used to surround her. You didn’t want to wash out her dog bed- remember?- so we could give it to the shelter. I stashed a shabby blue dog toy behind the coat rack in our closet.
After I had covered over Rope and patted down the grave with the shovel, I used it to hoist myself up. I wonder, was it wrong that for a moment I wanted to let myself right down again in the dirt and the sun with her stone as my pillow? I was remembering the endlessness of her eyes, late on summer nights when I knelt down to stroke her to sleep. 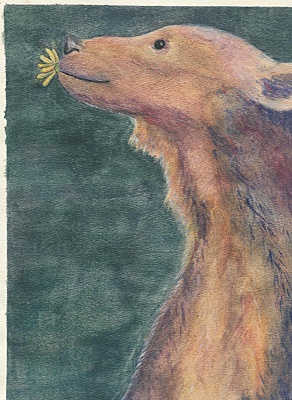 The author's comments:
This was inspired by my own dog, who deserves to be remembered.
Post a comment
Submit your own