“I don’t like this game!” Ruby shouted. “It’s too violent!” Even though the fans’ decipherable hollering made Ruby yell, her voice still dripped with her heavy, unmistakable country accent.


“What do you mean?” I shrieked over the noisy din reverberating through the amplifying gym. “Haven’t you ever heard of basketball?”


“No!” Ruby cried. “I told you—I was home schooled when I lived in Oklahoma!”
“I know that!” I rolled my eyes, annoyed. “But haven’t you even heard of basketball or ever seen a game played before?”
“Well, my cousins would talk about it when I’d visit them for Thanksgiving and Christmas and such, but I never knew there was so much pushin’ and stealin’ and scratchin’!! This isn’t anything like football!”


“Well…no, it’s not.” I felt exhausted. It was impossible to explain the concept of basketball to a girl who lived without a television set or radio till she was sixteen years old.


“…’cause my cousins would watch football at Thanksgiving and Christmas, but never basketball! I would’ve remembered all the violence, trust me!” Ruby claimed.


“How old are you again?” I asked. “Seventeen, did you say?” Sarcasm tinted my voice, but Ruby was too innocent to notice.


“Seventeen-and-a-half,” she replied matter-of-factly. I would’ve expected such a precise response from my eight (and-a-half!) year old brother, but never from a peer!


“Right…so, you’re seventeen—and a half—and you’ve never seen a basketball game before? Is that right?” I couldn’t bring myself to believe the words I was saying.


“Nope.” Ruby stated this so simply; I was shocked to see not a hint of embarrassment from being deprived of American culture for so long. What had her parents been thinking?


“Were you serious when you said you never owned a TV or radio in Oklahoma?” I inquired, becoming suspicious with this strange girl’s excuses.


“As serious as a dust storm!” Ruby vowed, raising her right hand to the roof of the gym.


I shook my head in disbelief. How could a teenager live her entire life without seeing an electric entertainment device other than at her relatives’ houses on holidays? “You didn’t even have a computer?”


“Not one cookie!” Ruby confirmed, severely abusing a new vocabulary word from our technology course.


“How did you get your information then?” I demanded, confused beyond measure.


“Then didn’t you see computers at the library? Please tell me your library had computers!”


“Oh, they did all right. In fact, they had a whole fifty-computer lab!”


“Not once.” My expression at that moment could’ve only been one of pure shock and disbelief. “I never knew how,” Ruby explained.


I slowly backed away from Leonard High School’s newest junior, who consequently returned to watching the game, disapproval glinting in her green eyes. I evaluated Ruby Pretticott’s appearance: soft, fluffy, hair that was a medium-brown tone with a light wave towards the ends; large, sparkling, clear green eyes with long, dark lashes to frame them; cream-colored sherpa lining the hood of a brand-new murky green bomber jacket that hugged her body and pronounced her enviable curves; loose black leggings drooping around her ankles; scuffed and stained Birkenstocks that were shuffled on over fuzzy pink socks. Her thin, fragile hands were folded neatly in front of her body, clutching a pair of gray knit gloves and an expensive-looking wristlet tessellated with a designer’s logo.
As the game continued on the court, Ruby’s lips pressed together to form a thin, worried line. The lip gloss was spread so smoothly, so perfectly, I wouldn’t be surprised if Ruby counted the strokes of the pussywillow swab as she painted on the maroon gloss every morning. Her eyelashes were so long and feathery, you could barely tell that mascara had been combed through them during Ruby’s daily make-up applications. To achieve the perfect enunciation of her finely-aligned cheekbones, Ruby must’ve counted each stroke of the brush as she powdered on that thin layer of rosy blush! How else could a mortal accomplish such excellence?
I marveled at Ruby’s flawlessness and wondered how she could possibly have been contained in a little Oklahoman house for her entire childhood and first half of her teenage life. Ruby’s perplexed eyes turned towards me and widened with surprise. “Y-you have somethin’ on your face!” she stuttered, pointing a shaky finger at me, her thin eyebrows furrowing with confusion.
I whipped out my sunglasses and analyzed my reflection in the shady plastic, searching for mud, crumbs, or—heaven forbid!—a stray lip gloss mark.
But there was nothing except for two dark streaks of black face paint below my eyes.
“Oh!” I exclaimed in realization. “You must mean the face paint! It’s supposed to be here.”
“But…why?” Ruby was clearly not understanding.
“Well…we do it to show support for our team…” I hesitated. How could I explain it? I wasn’t even sure myself why we painted our faces for home games.
“Why do get your own faces dirty just to show ‘support’ for our team? Can’t you…I dunno…make a poster or somethin’ neater like that?”
“Well, sure. Actually, we make posters all the time!” I told her, pointing into the bleachers where our friend, Mickey, was flapping a cardboard sign that read, “GO LIONS!!!” in bold, red letters.
“Then why the face paint?” Ruby insisted.
“It’s…it’s fun!” Lame, I know. But it was my only excuse! Besides, slathering your face (and for the males, torsos) in red and gold paint was very enjoyable. Somehow, simply writing “Go Lions!” in Crayola markers on the back of your science poster wasn’t as satisfying.
Ruby still wasn’t buying it. “I don’t get it.” She put her hands on her hips and faced the court again. “It seems so senseless to waste your time watching silly sports games when you could be at home, nurturing your mind with books!”
My jaw dropped at her words. “Are you kidding me?” I gaped. “You’re in high school! Attending varsity sporting events is the best way to spend your time! And you have to cheer them on! It’s the rules! You can’t, like, go to a game without wearing some sort of spirit wear!” I glanced at her outfit again. “C’mon, Ruby! Where’s your red? Where’s your gold? Show some school spirit—wear the colors at least!”
Ruby looked down at the floor, her maroon lips twisted into a thoughtful pucker.
I finally broke down and said it: “Ruby—the cheering section isn’t complete without every teen in the student body in the bleachers. It isn’t whole without you!”
A pair of green eyes darted up to meet mine. “Really?”
“Really.”
Ruby’s flawless white teeth flashed as her lips parted in a grin. “Alright! I’m in!” she announced excitedly, stuffing her gloves into her wristlet and snapping the brass clasp shut. “Do me up—c’mon! The whole shebang!”
For a moment, I had no idea what Ruby was talking about. Finally, as Ruby Pretticott brushed her brown bangs behind her ears, my face broke out into a smile.
I took a red Bingo blotter out of my pocket and painted two fat streaks below a pair of green, glistening eyes. 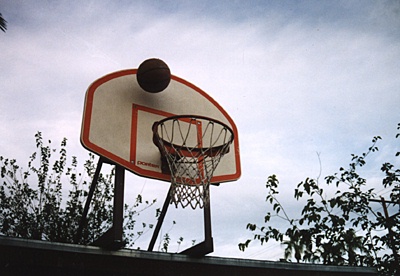 The author's comments:
I was inspired for this at my high school's basketball game. I welcome feedback. Enjoy!
Post a comment
Submit your own