Favorite Quote:
"Dream as if you'll live forever, live as if you only have today," - James Dean

The waves crash along the shore, washing the sand away. The sun glaring down overhead, baking the few people along the coastline. Little kids laughter drifting in the slight breeze, as parents watch smiling from their seats on the sand.

Standing under the shade of her back porch Delphina watched an ache in her throat as the small children laughed and played splashing about in the shallow foam of the waves. A shadow of a smile playing across her lips, as one of them turned to her and waved. Leaning against the railing, allowing her dark, curling hair to cover her face, as she looked down at the sand. Footsteps sounded behind her as she silently wiped a fresh tear away.

“I’m gonna miss it, too,” the lowered voice of her older brother almost whispered behind her.

She stayed silent unsure of how to respond to his statement.

“You know, where we’re going won’t be so bad… there will be a lake and amazing schools and new people,” he sounded so sure, so unfazed about moving.

“It’s not the same,” she said simply, quietly, as if to herself more than her brother.

“And that is why it is called change, Del.,” she heard the low, bass laugh of Jeremy and couldn’t help but smile.

“How do you do that?” she asked turning to face him. His eyes a bright blue to contradict his dark lock of curly hair.

“Do what?” he smirked crossing his arms over his chest.

“Always make me smile, even when I feel like crap,” leaning her back against the railing looking at him almost daringly.

“I don’t know, guess it’s a brotherly thing,” he laughed again this time Del. joined in her voice beautiful as a bell, two octave’s above Jeremy.

Jeremy came and joined her on the railing looking over the beach smiling. She knew he was lost in the many memories created at this beach, in this house. She, too, who seemed to be transfixed on a beetle as it crawled along the wooden rail was flashing through the memories of the ocean waves, putting their handprints in the cement driveway, finger painting the smiley faces that lined the rail, and many more. 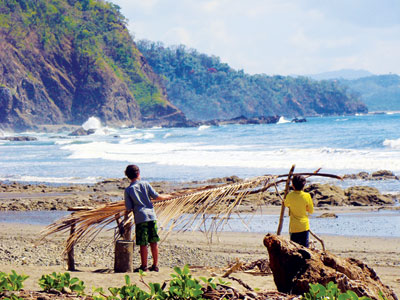