I Wondered what I was even doing awake at that hour. It was Thursday morning and I couldn't tell whether the sun was already rising or if it still had hours to go. My alarm clock was useless; I had never reset it when the power went out. That was months ago, but I still glanced at its numbers frequently.
The crickets and cicadas were active with their song but the birds had yet to come out. By that, I guessed it was nearly Four. Then, I don't recall what the time birds do start their songs. Four A.M., give or take a Couple Hours.
Interrupting nature's hum came an unnatural, heavy, wet Thunk. and Again. Something like hitting a burlap sack full of pebbled mud with a shovel. A Wide, flat twang to reverb it.
I pulled on my robe over my pajamas and stepped cautiously out my bedroom, through the kitchen, out the back door. There was no one to be hiding from, but I avoided all the creaky spots, those loose floorboards I've got memorized and left the lights off. Maybe out of the same habit that makes me check the wrong Time.
My Neighbor, Rory, he had an odd way of saying things; seeing things. Then, I had an odd way of seeing, thinking. We hit it off right away when he moved in. The first thing he did, before he even unpacked anything, he painted his cracked doorframe a CautionaryOrange and introduced himself to me. It was the most Natural thing anyone could do. Offered to paint mine as well, but I gracefully backed out.
Right now, Rory was in the backyard with his rifle, sweat, blood and tears, in order of least to greatest, are gliding down his face. His gaunt, stubbled face, fresh tears glittering in the moonlight, dripping from his nose, his beard. He stopped when my shadow casts over his work. His streaky face looks up to me in fear, with love. He was holding the wrong end of his rifle.
His Work: a mangled Sack of Blood and Bones and tufts of fur. His Dog. Charlie.
" Charlie, " he says, " Charlie was a Good Dog. I Loved her. "

" She bit the mailman more than once. She's Chased a couple kids, but she was a Good Dog. "
A Good Dog.

It's then I notice she's panting. A Broken, Bloody mess. But Alive. Rory has been beating her with the back end of his rifle. Her tail would smack against her own bloody mud at regular intervals. A Good Dog.
For all her Sins- Pissing on the Carpet, Humping the legs of passersby. God knows why. She was beautiful. But now, her skull cracked, her fur matted and filthy, she doesn't look too pretty.
" I Just want her to go to heaven, " Rory says.
He says it's the Only way. He could have put her down humanely. He could have had her euthanized. He could have shot her in the back of the head with his rifle, but this is the only way. Her suffering will outweigh her sins and God will See. She was a Good Dog. He doesn't care, he croaks, what will happen to him. If he goes to Hell for this, so be it. He thinks, Knows he will.
The thin cotton of his white, buttondown shirt clings to his chest with wet, the red slowly climbing the fibers, dispersing into pink.
Red, White and Bruised; Blood, Sweat and Tears. Rory hears his baby whine. She Cries. And it's for Him she cries. She was a Good Dog. He Loved her and She Knew it. She Deserved it.
Rory sucks in a breath and brings the butt of the gun down on her throat. Again. Again until her tail no longer swats the ground. Charlie, his Love.
She was a Good Dog.

Rory wipes the flecks of blood from his cheek, his lips with the back of his hand. The sweat from his brow.
His streaming tears. 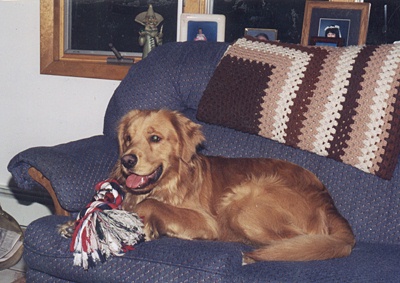