The woods are my home. They always have been. When I was little, my father used to call me his dryad. My house is about five miles from Nowhere, Illinois, and surrounded by trees. As a little girl, I explored the woods, going ever deeper as I grew older. All my games of pretend were played in the shadows of towering trees. I often felt out of place in the world of people, cities, progress. The woods were where I belonged. I could feel the wild music of nature flowing through my veins. I still can.

My mother often worried about me. She was a city girl and couldn’t understand my love of something as dirty as nature. But my father understood. He grew up on a farm. Whenever my mother started to complain about my torn and dirty clothing, he’d simply put his hand on her shoulder, and that was the end of it. My father and I didn’t talk much. We didn’t need to. We both spoke the same, silent language of the woods.

I remember that night. I was sixteen. The city didn’t bother my quite so much, and I had just been to the movies with friends. The movie was rated PG. I remember that the plot was simple, dumb, predictable. But I don’t remember what it was about. I can’t even remember the title. I walked in the front door to find my grandparents sitting on our couch with my younger sister. Her eyes were red, like she’d been crying. I thought she was still upset because she didn’t get to go to the movie with us, but that didn’t explain why Grandma and Grandpa were here. The next moment, Grandma enveloped me in a hug, and she was crying too.

Once she finished and had me sitting on the loveseat, she explained that there had been an accident. Dad had worked late at the office, so that he could take tomorrow off and have a three-day weekend to spend time with us. He was driving home late when a car full of young, college-aged kids tried to pass him. They must have been drinking because the driver swerved and hit Dad’s car, knocking him off the road. His car rolled down the steep ditch. It was a convertible. They look cool, but they don’t take rolls well. Especially with the top down. Grandma said that Dad had been taken to the Emergency Room at the hospital. Apparently he was pretty beat up. Mom was with him right then, and Grandma and Grandpa had come to spend the night with my sister and me. I didn’t think this was quite necessary, but I didn’t say anything.

The next morning, Mom called to say Dad had died during the night. My sister heard the news and went into hysterics. She was fourteen. I didn’t say anything. Again. I think Grandma tried to hug me again, but I pushed her away. I ran to the woods. I’m not sure what path I took, or how long I stayed there. I just walked. I remember my mind felt numb, as if I couldn’t take anything in. Everything felt so surreal. I woke up from my trance when I saw the sky turn red with sunset. When I got home, Mom was back and crying. I slipped up to my room and lay on my bed, listening to a new CD I’d bought the other day.

We live in the city now. Mom sold the house soon after the funeral. We have a small apartment with one shriveled, pathetic tree outside, surrounded by a sea of concrete, asphalt, and chain link fence. My mother and sister both love the city. I hate it. My sister is sixteen now and spends most of her time at the mall with a group of environmentally ignorant, city-loving scum she calls friends. My mother goes on dinner dates to the bistro down the street. I sit in my room, or sometimes I run away to the city park and sit in one of the carefully pruned, supposed-to-be-decorative trees they have there until a park person chases me away. Then I go home and Mom yells at me for not staying at home where I can help and she can find me.

I can’t tell her that I hate the city. I can’t tell her that I’m dying without real trees and woods. She can’t see that without my nature, I’m shriveling up, just like the tree outside. I don’t have friends anymore. I quit going out with them. I stopped returning their phone calls and emails. What’s the point? I’m graduating this year so I’ll never see them again anyway. Why should I bother listening to their mindless chatter? I’d rather listen to the chatter of birds again. Other than pigeons and house sparrows, although those are something, at least.

I had a fight with my mom tonight. A big one. I skipped school to spend the day at the park, and my darling sister told, as if she’s never spent the day at the mall with her group of paramecium brains. Mom said she doesn’t know what’s happened to me. I said it’s cause she doesn’t pay attention to me. She says she pays as much attention as can be paid to an uncommunicative daughter who never stays in the house and eats meals in her bedroom. I said I don’t stick around cause I’d rather not hear her prattle on about her perfect life that has nothing to do with me. She asked my why I didn’t just leave then. So I turned around, grabbed my jacket, and walked out the door. I’m walking now. Away from the apartment. Away from the city. Away from the noise. I’m going back to my home. I’m going to the woods. 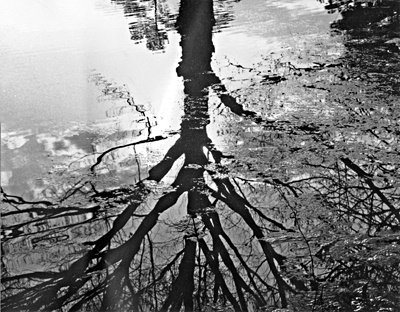 The author's comments:
Just as a warning to grammar fanatics, this story, unlike "Perchance to Dream", has not been edited or even read by anyone but me. It was written at 2 a.m., and so there are probably several mistakes.
Post a comment
Submit your own