Favorite Quote:
“I almost wish we were butterflies and liv'd but three summer days - three such days with you I could fill with more delight than fifty common years could ever contain.”

My eyelids fluttered open. I stared at my dark brown wooden ceiling then at the raw umber wooden walls and furniture. I pushed Grandmama’s quilt off of me and set my feet on the fallow floor. I went to my copper colored armoire and pulled out a white petty coat, a dark blue skirt and white shirt. I threw them onto my bed and reached for a pair of coffee colored stockings. I got dressed and snuck a look at myself in Mama’s mirror. My skirt used to be Ethel-May’s when she was my age but she gave it to me when she got married to her Jacob. The stockings itched, but with time I had gotten used to them. My skirt went down to my ankles and the loose, long-sleeved shirt was tucked into the blue skirt. I meandered over to the washroom and took my apron off the drying rack. It was very stiff so I crumpled it up a bit, only to see that I had created many wrinkles. I groaned and pulled an iron off of the stove. After smoothing out the wrinkles. I put my apron on.
My sister, Margret, was in her room knitting Aunt Catherine’s newborn baby a pair of booties to keep his little feet warm when the harsh weather came. It was on its way. I burst in to Margret’s room and asked her to do my hair. She roughly brushed my hair, jerking my head back with every movement of the brush. I had learned not to complain about it hurting because otherwise she would hit me over the head with the back of the brush. I’ll have you know that it hurt tons. Margret pulled my hair into two French braids and sent me out so that she could continue with her knitting.
I put on my bonnet and went out to the barn to help Papa, Uncle Wilfred and his Jonathon milking the cows. Instead of just seeing my three relatives in the barn, I thought I saw the whole town crowding around a makeshift pen. Jonathon saw me and came running over.
“Ida-Grace, come look at this!” He took my hand and led me over to the pen. We pushed our way through the crowds and saw a calf and its mother both lying in the straw.
“Jonathon, it’s a baby!” I cried. “It’s out of season! What’s gonna happen to it?"
Jonathon shrugged, “I don’t know. Its so small, I wouldn’t be surprised if the little thing doesn’t survive the first snowfall”
“We can look after it!” I tried to sound as upbeat as I could. But Jonathon looked doubtful. I noticed Papa. I pushed and shoved my way over to him. I tugged at the sleeve of his coat. He looked down at me and smiled. He lifted me up into his arms.
“Good morning Ida-Grace.” He said. “I take it you’ve seen the new arrival?”
I nodded, “Yes Papa, I did. What are we going to do with it? Can I look after it? Can I?”
Papa’s eyes turned sad. “I don’t know Ida-Grace. You’re awfully young to have a big responsibility like that. Maybe if you looked after the calf with someone else, like your sister perhaps.”
I frowned. “Papa, you know Margret has no interest in being in the barn. It would be a ridiculous idea to give her that duty. If by some miracle you were able to persuade her to look after it, she wouldn’t let me near the dear thing.”
Papa laughed. “Ida-Grace, you shouldn’t talk of you sister like that.” I was about to interject when Papa seemed to read my mind and quickly added, “even if its true.”
Papa set me down and pointed over to where Jonathon was. He whispered in my ear, “see what your cousin thinks of you two looking after the calf.”  My eyes brightened. I kissed Papa on the cheek and ran over to Jonathon. I explained the good news.
Later that evening, I went into the barn with old blankets, Jonathon was trailing being me. Papa had managed to get the new mother and the calf into an unused horse stall. I unbolted the door and stepped in. Jonathon and I started to put the blankets around the new baby where it was sitting. The mother also sitting and we placed some of the extra blankets on her too. Jonathon and I stepped back to admire our handy-work. Pleased with how cozy they looked, we left the stall then bolted the door behind us. We skipped and ran back to the house and warmed ourselves in front of the fire. The both of us fell asleep on the couch enjoying the warmth. Papa must have carried us off into our own beds for I woke up still in my clothes from the day before and Grandmama’s quilt was tucked around me. I hopped out of bed and ran to Jonathon’s room. I practically jumped on him.
“Get up, get up!” I yelled. A minute later we were at the front door and were greeted by bitter wind and a large flurry of snowflakes. Panic surged through me, I grabbed Mama’s shawl off the rocking chair and wrapped it around myself, then ran to the barn. I burst into the stall and flung myself down next to the pile of blankets only to find that the little calf hadn’t made it through the night. It hadn’t made it through the first snowfall. 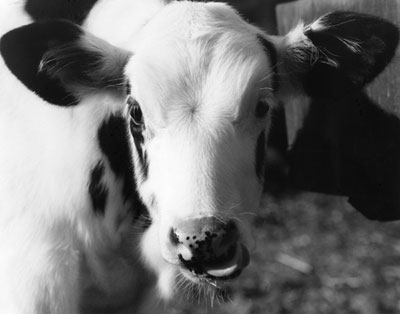