Footsteps rang out on the iron balcony behind me.

"Wait! There is something I must tell you!" The southern drawl was soft against the pattering April rain. I looked at the stairs leading to the ground, wondering if I could leave before the confrontation. No, I should stand my ground; he could not persuade me.
"I have to go," I said, at the same time he said, "Please, listen." The northern accent of my voice and the southern accent of his voice countered.

'Speak your mind, for I must leave before the storm strengthens,' I stated, with an edge to my words. He fidgeted, crossing his arms and changing his posture.

'I... Melinda, it would be best if you waited 'til the storm ceased." There was urgency to his words that made me reconsider.
I knew there was more to say, but I would be patient; I would wait here until he could speak freely.

'I will depart tomorrow morning, Thomas.' A relieved look crossed his face, and then was replaced by a shadow of emotion I could not recognize.

Once we were inside and dry, I settled down in an old rocking chair facing the window in my room. A weathered and worn book sat on a nearby table. I picked it up, accidentally causing the maroon leather cover to come off in my hand. The title was in a language I could not understand, which was odd, for I was fluent in many languages. The majority of the book was in the same language, but there was a bit of English scattered through the pages. I contemplated the English words and decided they were describing land surrounding the Dailey family's farm, which was near a quarter mile away.

The sun had set long before I put the book back on the table, so I crept up the stairs to Mrs. Dailey's attic room. My whole journey to the southern state of Alabama in early 1860 had been a result of my mother's friendship with the Dailey's. Our families had been close friends generations earlier, before the horrible concept of slavery began in the South. Mother heard that Mrs. Dailey was ill, so I made my way to this little town near the coast.

As I peered through the narrow crack between the wall and the door, I could see Mrs. Dailey had been weeping, for the faint trail of tears streaming down her face glowed in the candlelight. Unlike Mrs. Dailey's beliefs, Mr. Dailey was of strict southern thinking, and had joined the Confederacy. Neither Thomas, nor his mother had heard from the man since I arrived, four years ago.

Satisfied, I climbed onto the straw mattress and willed myself to sleep. Nevertheless, surprisingly, after the many nights I had spent in this room, I could not rest. Thoughts of Mr. Dailey, my mother and my family back North, the situation here, and the war ransacking the country prevented my mind from slowing. I thought of how Mrs. Dailey did not support the philosophy that women should only be wives and mothers. She was ahead of her time in many other fields.

I thought of the family I left to come here: my mother working in a fabric mill, my two brothers, Jacob and Stanton, aiding the progression of the North, and my father, also aiding the North by transporting goods down the coast. I wondered how Mother's working conditions had improved, and if Jacob and Stanton had done deeds for or against the war. When I had left, no one had even considered the thought of war, so I did not where anyone stood on the matter.

When I finally cleared my mind and my thoughts slowed, I fell asleep, knowing all too well how late I would awake in the morning. However, I had never been raised a woman to consider the disdainful points in one's sleeping habits. I also knew Mrs. Dailey would wake later than I, so, with that in mind, I fell into a deep sleep.

The atmosphere after the consistent gloom resulting from the rain was bright and pleasant. As I heated water to make coffee, I saw Thomas already out in the fields, assessing the rain's damage and checking the welfare of tiny seeds planted prior to yesterday. The black kettle heating water on a woodstove whistled, and I made enough coffee for Mrs. Dailey and me, as Thomas did not drink it.

A warm breeze drifted in the kitchen when the closest neighbor, Mrs. Patricia Mannering, loped in.

'Well, hello, Melinda! I did not expect you to still be here. What postponed your trip?' Without waiting for a reply, she continued.


'Oh, well I guess you don't have to answer that, dear. Is Jane up and about yet?'

Patricia left her basket on the table, along with good wishes and offers to help Mrs. Dailey. She departed as quickly as she had come, leaving me to think, 'What an odd woman.' But she was a friend of Jane, so I did not utter a word.

'Morning,' Thomas muttered as he trudged in the door, which seemed to be getting a lot of use today. He scarfed down a brief breakfast of a slice of buttered wheat bread toasted, a tin cup of tea with cream and sugar, and a sliced pomegranate. I waited until he had finished eating and then told him of Patricia's visit, although I doubted he was listening.

My mornings at the Dailey household were frequently calm, this Saturday morning no exception. I had Thomas I would be leaving today, but I wanted to hear what he still had not told me. He seemed resigned recently, this morning in particular.

I loved the warmth of the southern states, however, I somewhat missed the chill of a fall morning or the swirling snow of the north. The people here would flounder in such environments, where their abominations, those hideous plantations, would not grow crops. As for the northerners, would they be unadjusted to the life of farming and falter, also?

I was sitting in the small room off the parlor, when I heard the back door slam. Figuring it was Thomas, I did not move. Then someone called out, 'Hello, Thomas, are you here, boy?' so I rose cautiously out of the velvet chaise and walked silently to the doorway.

A man in a Confederate soldier's uniform stood near the kitchen table, looking around. I gasped; surprised such a man would be standing in a house owned by people with such opposite ideas than he. He turned, I suppose expecting a young Thomas, and recoiled when he saw me.

'Thomas isn't here, sir,' I stated. As if to reply, the man sat down in one of the chairs, and watched me, perplexed. 'What can I help you with?' I tried a second time. He spoke in a raspy voice that I expected from a man much older.

'I am Isaiah. Isaiah Dailey; pleased to make your acquaintance.' I was stunned, and shook my head, trying to clear it. This man said he was Thomas' father, but he had been gone for so long. What would I tell Mrs. Dailey? Surely, her illness would improve if she knew her missing husband was back.

He seemed to know I was contemplating telling Thomas and Mrs. Dailey, so he said, 'I know how strange this seems, but I am back. Now, if I might ask, who are you?'

'I am Melinda-" I started to say, and then someone else ran into the room.

"Melinda! What are you doing?" Thomas shouted. He was staring at the worn leather book in my hands that I had found earlier. The book had confused me, its pages written in a foreign language. Thomas pulled me into the parlor and furiously whispered the story of the book.

Supposedly, it had been a guide made for slaves escaping to freedom, when the Dailey's had had slaves so long ago. He explained when Mr. Dailey saw me holding it, with a horrified look on his face, that the book allegedly bestowed a curse on whoever was curious enough to scan its pages.

'This is why I wanted you to stay, Melinda,' he said. 'To help me solve the mystery of my family's past.'

In my peripheral vision, I saw Thomas' father step closer to the parlor doorway. In a hushed tone, I asked Thomas to tell his mother of the unexpected visitor. Meanwhile, I stalled Mr. Dailey as best as I could.

'No, darlin', I'll just have water.' Moreover, with that, he walked over to a cupboard, got a tin mug, and filled it with water from the pump outside the door, as if he had lived there for the past four years.

'Mr. Dailey, how is the weather in the north?' I asked, interrogating in a way.

'The North?' he laughed. 'Why would I go up north around all those weak, petrified little men? No; I've been out west all this time, trying to talk those fools into joining the South.'

'Oh, that is where you've been all this time, Isaiah? Go do dirty work for a horrible society of lies while your family is left behind? Have you thought about what have done to me?' Mrs. Dailey asked, coming up from behind. Her usually scruffy brown hair was swept up elegantly into a pile on the top of her head, and she wore a black velvet dress without shoes.

He gazed at her, somehow sensing how she had changed from when he had seen her last; how her disposition was bright while her voice was cold and dripping with menace.

As they argued, Thomas and I looked back and forth, and then quietly stepped onto the old iron balcony.

'Well, Thomas, you said I should wait until the storm ceased, and now I know what you meant. Your father is back, your mother is not ill any longer, and, of all things, the rain has stopped. So, I shall go; but I will give you the choice of traveling north to meet my family as I have meet yours.' Before I had finished giving him my proposition, he was through the door, up the stairs, and packing his bags to leave. We said farewell to his parents and set off. 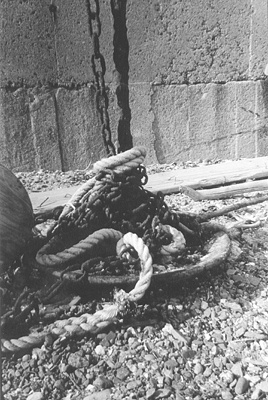