The boat rocked back and forth as I held onto the railing, afraid of falling over the edge. The smell of the salty ocean filled my nostrils, my eyes were closed so the mist wouldn't come into my eyes and sting them. The boat was packed with thousands of people awaiting to see what would be their new home. We passed the Statue of Liberty, and I turned my head to gaze at it. Will it really? I thought will it really be different? As I continued to gaze at the great statue nerves chilled up my spine. The wind blew in my face, and I somehow knew it really would be different than what I knew back in Germany. I knew deep down in my secret soul I would miss Germany, after all it was my home country... but at the same time something was pulling me toward America, just the thought of freedom, being able to express my opinnion. A smile began to grow on my face as I thought of these things. I once again closed my eyes and inhaled the repulsive yet sweet smell of the sea, things were going to change, for better than for worse.

The ship boarded the dock, instantly mobs of people all from different countries and cultures began to crowd the front of the boat eager to get off what they had been on for months. To finally put their feet on firm, unswaying ground. I was packed in the mist of numerous of people, so packed that I didn't even have to use my feet. Instead the crowd raised me up so that they were practicly carring me off the ship. I heard people shout in different languages, trying to find loved ones that might have gotten lost in the crowd. I continued to be carried off ship, when suddenly the people were gone and I stumbled down the ramp of the ship. "OOF!" I let out as I hit the bottom, where a nice young American sailor came to help me up. "Are you alright?" He asked his chocolate brown eyes meeting mine. I just stared at him, my mouth open, embarrassed and confused. He grabbed my arm and gentely helped me up and watched me as I put my head down. I was about to wobble off in a different direction when he stopped me. "Wait," He said. I looked up at him, his blonde hair looked gold in the sunlight. "You only just got here. Would you let me have the honor of showing you around? I know every inch of this place." I gave him a slight nod, then he led me through the crowd.

"I'm Michael, and you are?" Michael asked as we finally got out of the crowd. "Adora." I replied, blushing at my heavy German accent. "Good you understand a little English." He remarked and motioned for me to follow him.

He led me to a diner where he ordered two coffees for us. As we waited he tried to start up a conversation. "So where exactly did you come from?" Michael asked, he seemed intruiged. "Germany." I replied, surprised at how much attention he was giving me. "Why did you leave?" He enquired, this made me swallow hard. My heart throbed at the thought, the images flashed in my brain. "Well, in Germany there are a lot of wars. Disputes over religion rule the land, driving people out of homes. Armies would come onto people's fields and take cattle. Germany not a safe place to live most of time." I explained to him, the words were reluctant to leave my lips since I spoke little English it was hard to form sentences. Michael nodded, he seemed to feel bad that he asked. "I'm sorry." Michael said, looking down at the table. "It's ok, that why I come to America to be free from poverty that Germany have."

We finished drinking our coffee so he brought me to the park that's scenery was the most breath taking thing I have ever had the chance to encounter. The whole park was scattered with rose bushes, and birds singing their songs in the trees. In the quite distance you could hear bees buzzing about the daisies, and little creatures nibbling on the leaves making a soft, gentle crunching sound. Michael brought me to an immense wooden bench that was covered in white paint. Above it was a giant oak tree with the branches and leaves swaying in the breeze, behind it was a crystal clear lake with swans and ducks slowing floating on it causing the littlest of ripples in the still, cool water. We both sat down together, admiring the beauty of it all for a few minuets. Michael turned his head to look at me and asked "You like this don't you?"

I looked up at him and sheeply smiled "Nothing like Germany." I answered softly. "Now what have you found so far about America that you think will make it a good home for you?"

I looked around and slowly inhaled drawing in all the fragrences of the park and said "Peace. No more fights in the middle of streets. Freedom, no more judging people because of faith." "Anything else?" He enquired, coloring slightly. I couldn't hold in my laughter, I giggled and blushed. "Maybe, I might need time to figure that out." I replied. I once again looked up into his chocolate brown eyes, which were twinkling out of laughter.

I spent most of the day with him, until I left to the area I would be staying at in America with the rest of the German immigrants. Change the word played in my mind, the thing I knew America would bring to me. Both excited and nervous I entered the house I would be living in, and as I walked inside chills went up my spine, I had actually done it. Now that I had made it to America I was ready to face the world. 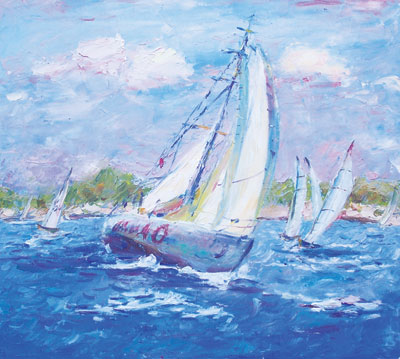 lovelife123 said...
on Dec. 17 2010 at 1:12 pm
I absoulutely admire this stoy it not only reminds of love brings me back to historical times! This story brings joy and happiness to my life and heart!
penguin35 said...
on Nov. 16 2009 at 2:47 pm
I chose to read this because I'm interested in immigration, and I'm glad I did. This was really good. It was very descriptive, especially the first two paragraphs. I liked the part where she said she barely had to walk because the large crowd was carrying her with them :)