George Weasley felt a hand on his shoulder. He turned around to see his younger brother, Ron.
"Time to go George", he said. George stared at him for a few moments before turning back to the tomb, he had been looking at for such a long time.

Fred Weasley
1st April 1978 - 2nd May 1998
Died in the Battle of Hogwarts
Loving brother, son and friend, one of the best pranksters of all times
We love you Freddie

"Why did he leave me Ron?", George whispered, tears pooling around his eyes.
He felt Ron's arms around his shoulders. He leaned into his arms seeking comfort from his younger brother.

Today was the fifth death anniversary of Fred Weasley, who had died a hero  on the battlefield. That day George Weasley had also died. Only a shell of his former self was left. Everyone knew George Weasley would never be the same person he used to be.

Mrs. Weasley was setting up the table for breakfast when she saw her son's face. Gone was the mischievious smile. Gone was the twinkle in the eyes. She knew George would never be his old self again.

"Sit down dear", she said to him gently. "In half an ahoue you'll be leaving for Hogwarts."
"Why mom?", George asked. "Why do they want me to recount that terrible day in front of thousands of students?"
Mrs. Weasley smiled sadly at him.
"I know this is very painful for you. But think like this- your brother will get the respect he deserves."
"I don't know how I am going to do this", George said through gritted teeth. "I can't even pronoune his name without melting into a puddle of tears."
Mrs. Weasley ran a hand through his hair. "That's why your father, Bill and Ron are going with you", she said.

Two hours later, Ron, George, Bill and Mr. Weasley were standing beside headmistress McGonagall as she gave her welcome speech to the students.
"Welcome to another year at Hogwarts. Last year was successful. I expect you all to be successful this year also, with more vigour. Now, I have an important announcement. You all know that today is one of the most important days in the history of the Wizrading World. Five years ago, on this day, the evil was deafeated for the second, and final time, by The Boy Who Lived. Many heroes died to save Hogwarts from the deathly clutches of Lord Voldemort. Today we are honoured to have the members of the Weasley family, who not only played an important part in the war, but also lost a loved one. I would like to invite George Weasley to say something."

George had been dreading this moment. He so not wanted to do this. But then he felt Bill's hand on his shoulder and heard the words he whispered, "we'll go through this together."
George nodded and went towards the head table. McGonagall took him aside. He was surprised to see tears in her eyes!. She wasn't the kind of person you could imagine with tears in her eyes in front of thousands of students!
Sh gave him a teary smile and said, "you both used to get on my nerves. But I must say . . . I miss him."
George nodded then went to the podium. Everyone was staring at him. Maybe they were thinking that this George Weasley was the owner of Weasley's Wizard Wheezes, one of the best pranksters in the history of hogwarts. But now he was just a broken person. Broken by his brother's death.

"I am very glad to be here", George began. "Hogwarts has always been my second home. i spent half of my childhood here, pranking, learning spells and curses, brewing potions. I did all that with my twin brother, Fred Weasley."
There was a deathly silence.

"This day, five years ago, was a terrible one", George continued. "We all knew Voldemort was back. We had expected a battle. But to be honest, the fact that this one would turn out to be so violent, was not on anyone's expectation list.

"Our first mission was to bring Harry safely from the Dursley's to our house, The Burrow. That was the only time my brother wasn't with me. It was terrible. I took an oath that never would we work seperately again. That was the time I lost one year. See here?", he pointed to his ear wound.

"When I opened my eyes, there he was staring at me, his anxiety levels shooting up". George gave a choked laugh,"his wide, staring eyes were bloodshot and his cheeks were so flushed, that I almost had the urge to give him the name 'Googly- eyes Gorilla'.''

"But when we went to Hogwarts, we had to seperate again. Fred went with Percy, and I went with mom and dad. That was the last time I saw my brother alive", he said softly.

"Many people died. Curses were flying everywhere. But I wasn't bothered. When he was brought into the Great Hall . . . among the dead . . . I - I thought . . . he was just playing a joke on me. He was alive! But I was wrong", George's voice was shaking by now.
"But even among the feelings of sorrow, I couldn't help but feel proud. His lips were curled up in a laugh. My brother died laughing."
George started crying openly. This was hard but he also felt good. Everyone would know how brave Fred was.

"Since our chilldhood, we were best friends. We did everything together. I was the quieter brother. I used to plan out our plans, but did them not have that much courage to execute them. Fred was the one to play out my plans. When he died, I felt like I too was dying from inside. I felt like my right hand had been ripped apart. I-I . . ."

He could not continue. He broke down completely, and fled from the hall. He did not want to appear weak in front of all those people. He ran and ran and ran without knowing where he was going. He stopped when he got tired and started walking back and forth in a corridor. He needed a place ti be alone. He wanted to be with his brother. He wanted to see him!

All of a sudden a door appeared on the wall. George just stared at it with amazement, until realization hit him. He was in front of the Room of Requirement!

He opened the door and went inside. The whole room was empty. It just had a mirror in the center. It was the mirror of Erised. His heart soared. Maybe now he would be able to see himself with his brother. He went amd stood in front of the mirror.

All he saw was his own face smiling at him. He stood there staring, as waves of disappointment hit him. He tried seeing fromo different angles, but he could not see Fred anywhere.

"Why?", he whispered. Then his voice started rising. "Why?! Why don't you ever come?! I can't see you in this mirror! I go to your tomb everyday, hoping to feel your presence. But nothing! All I feel is the haunting emptiness inside me! I beg you to come in my sleep and tell me that you are happy, you are in a better place. You never come! Why Fred?! Why?!", he shouted. All the anger, guilt. sadness that was buried inside, came pouring out. George kept shouting until he did not have anything more to say.

He sat down on the cold, hard floor and weeped. He looked up to the mirror, hoping to see Fred, hoping his words must have made some sense to Fred by now. Again he saw the same image.

"GO AWAY!! I DON'T WANT TO SEE YOU!!", George screamed. He took out his wand and with a wave, broke the mirror into pieces.

He stared at the pieces, before stomping out of the room, crushing a piece or two under his foot on his way out.

But George did not notice one thing. The reflection which he saw had two ears. But George had only one ear. The Mirror showed George what his heart wanted to see. Only George did not pay any attention.

George Weasley never got to know that the smiling reflection staring down at him was not himself, but his twin, dead brother, Fred Weasley. 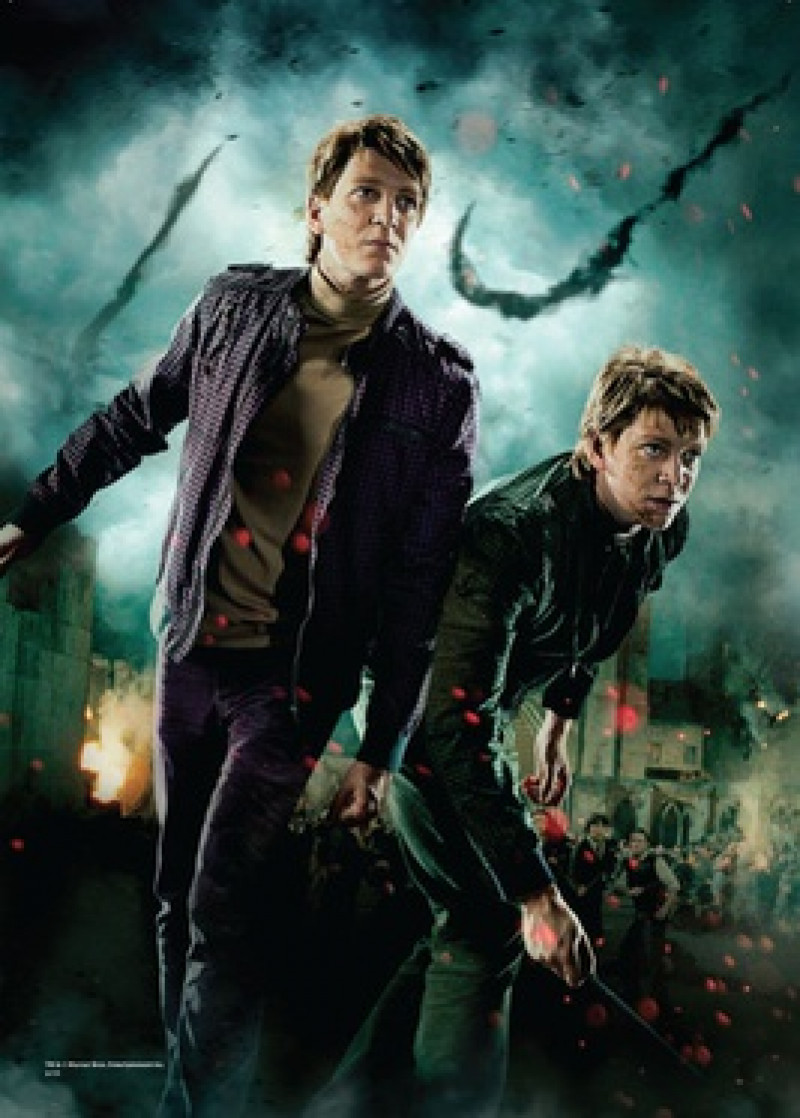