Miel Moreland: A Star In The Making | Teen Ink

Miel Moreland: A Star In The Making MAG

My name is Luka, and I had the honor to interview Miel Moreland about her Young Adult debut novel, It Goes Like This. This book is about four LGBTQ+ teens that break up their world-famous band after a falling out but are brought back together after a storm devastates their town. The book explores two major concepts. The first explores growing up and evolving relationships, and the second is the representation of LGBTQ+ people in a positive light. What makes this book even more special is that the plot doesn’t focus on around bigotry toward the LGBTQ+ community, which has been seen time and time again in literature. It was an absolute
pleasure and honor to work with Moreland and Books Forward on this interview, and as an LGBTQ+ teen myself, I am grateful for the inclusion and normalcy that is displayed in this book.

1.) Did you fear any or have you received any backlash from writing this book about queer teens?

"I haven’t received any backlash yet — or if there has been, I haven’t seen it! I don’t search my name or read Goodreads reviews, so there might be some small grumbles floating around, but nothing that’s reached my attention. I know it frequently happens to queer writers, and I’ve mentally prepared for this to occur in the future. I wouldn’t frame it as something I was 'afraid' of going into the publishing process, as I feel supported and protected by my publishing team and other queer writers."

2.) Did you face any initial rejection for this book idea?

"It depends on what you mean by initial! Like every other writer, not every agent I queried wanted to represent me, and not every editor to whom we submitted the manuscript wanted to buy it. But all of that occurred within very normal time frames or numbers for publishing, so I don’t see it as rejection so much as part of the process for finding a publishing team that was a good fit for me and my book."

3.) What inspired you to write this book?

"I was inspired by so many different threads of life and culture! It Goes Like This is about a broken-up band, so I was heavily inspired by music and fan culture. I also had questions about ambition and how friendships change as we grow up, so I wrote some possibilities into the book."

4.) Is there any message that you hope readers gain from the book?

"One message I hope readers gain is one I am always trying to remember myself: it’s okay to change your mind, and more than once. You can decide to quit; you can decide to try again; you can decide to try something entirely different. Related to that, I hope readers gain comfort in seeing that friendships can change over time. Sometimes, we’re not able to be good friends, for a variety of reasons. But we can change, and our friends can change, and if we make space for those changes, friendships can (sometimes!) redevelop stronger than before."

5.) It is very uncommon to write a book about LGBTQ+ characters, much less with the plot residing away from bigotry. This kind of normalcy is rarely seen in the real world. Was that a factor in why you wrote this book?

"Yes! I wanted to write a book where queer teens could, for the most part, have the weight of bigotry taken off their shoulders. I think it’s important that YA novels exist that do represent the pain, uncertainty, and violence that so often faces queer people, but I also believe that there should be a full range of queer books — and that means some books that focus on queer joy. It was important to me to write a book in which the problems do not come from bigotry, but primarily from other sources. We spend so much time worrying about queerphobia crashing down: that’s not this book."

6.) How do you fit writing into your daily routine?

"I don’t write daily! How I incorporate writing into my week shifts with every season, semester, or job. Lately, that looks like carving out a couple of hours after work two or three days a week, plus a longer chunk of time one weekend day. Mentally, I need to have time to rest, to take care of the rest of my life, and to spend time (even virtually) with friends and family. Setting
myself up to write every day would be setting myself up to fail — and I’d rather set myself up for success. Under this routine, I’m setting a clear intention for times when writing takes precedence over everything, while acknowledging that other areas of my life need time as well."

7.) Are there any aspects of the book that reflect your personal life (people, past events, etc.)?

"Other than the band’s musical style and the music references included in the book (which primarily reflect my own musical taste), the setting was the element most heavily influenced by my life. I grew up in Minnesota but attended college in Los Angeles County; the book of course is primarily set in Duluth, Minnesota, with a handful of chapters in Los Angeles. I enjoyed being able to include places I’ve been in both states — both lives — in the novel."

8.) If you could tell LGBTQ+ teens anything, what would you want them to know?

"You are wonderful exactly as you are. Of course, exactly who you are or who you understand yourself to be may change over time — you don't have to know everything right now. No one is entitled to know your truths; your safety matters more than anyone's curiosity." 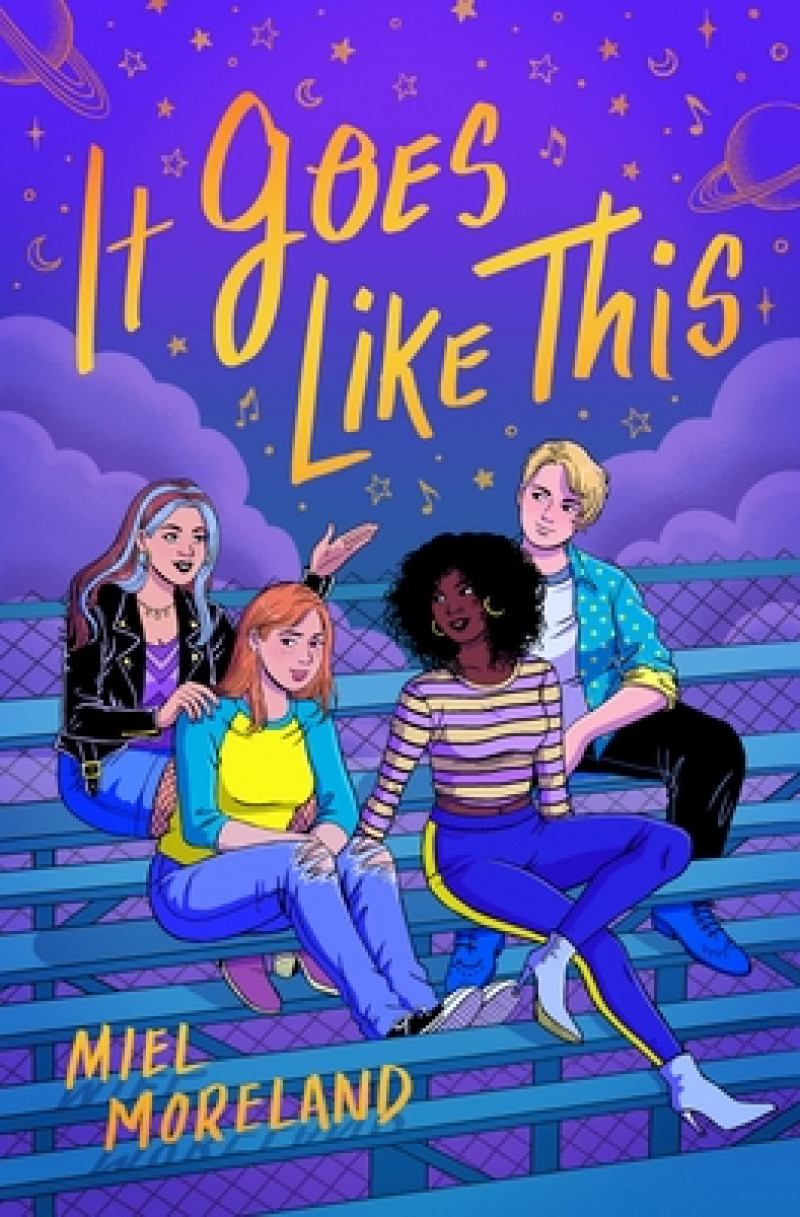 I had the honor and pleasure to interview Miel Moreland, a YA author on her debut novel, IT GOES LIKE THIS. I recommend this book to anyone who is looking for a good new read. I have just begun reading it and I am in love.

View profile
i belive this belongs in nonfiction, altho I'm confused as to why there's an option in fiction for author interviews. but it doesn't show up as a category in fiction so I have no clue.