"What do you have to say for yourself?" Sarah,Chuck's mother, asked, gazing sternly at him from behind her curly bangs. Some ofthe hair had escaped from behind her ears, where she usually kept it. Her hazeleyes were unmistakably warm and loving, but she looked down her nose at her sonto make sure he got her point. Sarah was angry.

Chuck's lower lipquivered. He sat perfectly erect in the folding chair, toes pointed down, hisnine-year-old legs barely touching the aging linoleum floor. His hair was yellowand curly like his mother's, but his eyes were a deep green that reflected thefather he would never know. He looked at his mother pleadingly, his hands foldednicely on top of the card table that served as their kitchen table. Behind hisemerald eyes was a very bright little boy who was very afraid of disappointinghis mother.

Sarah sat opposite him, the afternoon light catching her curlsand illuminating her serious face. She fiddled with the apron of her waitressuniform. Tightening her lips, her young face was a mask of parental concern anddisappointment. Chuck's lower lip shook uncontrollably and he, in turn, fiddledwith the hooks on his overalls to avoid her look.

"Charles, I justdon't have time for this," she said. But she did not get up in a hurry. Shelet the silence linger. She tightened her lips again because she was nearsmiling. Chuck looked adorable in those overalls, and a faded image of his fatherwas before her eyes.

"Give me the paper."

Sarah put herhand out on top of the card table, palm up. Chuck pulled a neatly folded butroughly handled piece of white paper from his pocket. His green eyes met herhazel ones. Her eyes were still warm, but the small crows feet beside them showedso much distaste that Chuck had to look away before he began crying.

Sarahtook the small square of paper and slowly unfolded it.

As she did, Chucknoticed a ladybug crawling across the floor. It made him think of the one he'dbeen watching earlier that day at school. His desk was near the back window, andhe had been deep in thought about where the little red bug was going and why itwas going there, when his teacher called him to the front desk.

Chucktrembled. He'd been to her desk five times already, and it was only the secondweek of fourth grade. The first two times were because he finished his work tooquickly, the next because she thought his perfect papers meant he was cheating,and just yesterday she said he needed to sit forward and pay attention. He hadbeen watching the storm clouds roll in and was imaging a gallant battle betweenthe sun and clouds. His green eyes had filled with tears when his teacher gavehim back his paper.

Sarah finished unfolding the paper and smoothed it outwith a soft crinkle as she ran her hands over it. Without reading the paper shesaw the grade of "F" and the comment of "Not looking forimagination, assignment misunderstood." Her heart fell. Chuck had neverbefore gotten a grade below an A, much less an F.

"Chuck, what do youhave to say for yourself?" Her eyes begged for an answer.

Chuck bithis trembling lip and swallowed his fear. "Mom, I did what she asked. I eventyped it." His voice was warm and honest, not conniving or even eager toplease. He was too young to lie for a chance to get away with something, yet hewas old enough to know honesty mattered.

He had spent two hours typingthis first essay for school on the mechanical typewriter. Chuck had typedcarefully and was proud of his accomplishment. Sarah had watched him from downthe hall, smiling at how his feet did not reach the floor in the big desk chairand how diligently he worked to impress his teacher.

But she didn't smilenow. Chuck's frankness was rewarded with tight lips and a hurt expression fromhis mother.

"Charles, I work two jobs now." She sighed and wrungher apron. "I know Saint James is a better school for you, but it costsus." Her bangs were fully out from behind her ears now, and she thoughtfullyslid the golden ringlets back to a secure position. "You can't bring homegrades like this. It's your second week, and an F already?" Her tone becameexasperated. "You simply can't do this!" Her voice rose and Chuck'sface turned white as he lingered on the edge of tears.

But Sarah stoppedand looked down at the paper again. It read, "My Summer Vacation, by CharlesDarwin Wensel." She lifted her eyes from the paper to notice the room aglowin the light from the sunset outside. Charles watched it through the windowbehind her. She continued reading.

Only four paragraphs filled the singlepage, but the prose was perfectly written. The story was of a young adventurerand his golden-haired mother on safari living with the natives in the wilds ofthe Serengeti. The smell of the hunted lions in the early morning dew, or nappingin the shade on a hot afternoon, jumped off the page. Sarah could see eachtwinkling star of the Southern Cross in the night sky high above the campfire.They had followed a pride of lions for two weeks, and at the perfect moment thenoble hunter, Chuck, had spared the lion because his mane was too beautiful. Whenhis mother asked why, the hunter said he would remember the trip with his eyesrather than by bringing back a skin to serve as a carpet in his four-storywood-paneled library.

Of course, there had been no actual safari toKenya, no actual hunting trips or natives, and certainly no wood-paneled library.The whole paper was a fantasy of nine-year-old proportions. But as Sarah read,her concerned expression faded to simple intrigue, and finally her face dancedwith joy, her smile revealing white teeth and young dimples in bothcheeks.

Chuck had checked out a book by Hemingway and read it in spite ofher telling him it was too challenging. He spent his summer outside in the alleybehind their small house or reading on the porch swing. She had only seen himwhen she left early to go to work at the dentist's office and when she came hometo make him dinner before going off to waitress. Sarah never wondered if he wasenjoying himself because he was always smiling and telling her of the latestadventure he had read.

Chuck was surprised to see her smile. He looked ather, confused. He had totally disappointed her, yet she wassmiling?

"Chuck, dear, you left out the part where you saved me andthose natives after the hippo attacked us on the river. That was a very importantexperience," she said with that face-animating smile. Chuck's eyes lit up,matching her huge smile in brightness.

Sarah wiped her hands ceremoniouslyon her apron and lifted the greasy, creased paper from the table. She put out herhand to Chuck. He took it and jumped from his folding chair to the floor. Thetears were gone and the two golden heads bobbed together inlaughter.

"Bwana, this is refrigerator material," Sarah said.Chuck's smile grew to show even the gums. She stopped at the olive-greenrefrigerator and knelt on both knees. She took four round magnets from thefreezer door and clicked them into place at the four corners of the paper, surenot to cover either the grade or the comment.

Chuck hugged her andtheir golden hair met in the embrace. Sarah's face reflected love and pride, andthe contact paper on the cabinets reflected the red light from the sunsetoutside. The rosy color made the cabinets look like genuine wood paneling. 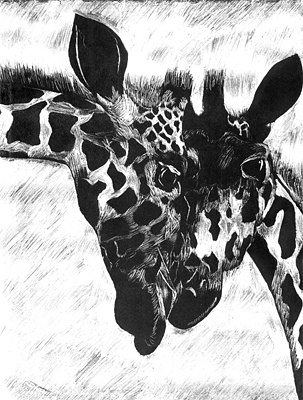