Favorite Quote:
You know that you are in love when the hardest thing to do is say good-bye!!

Imagine its a cold fall evening, the wind whips, rustling the trees and making leafs a mix of tinted brown, golden yellow, carrot orange and a blood red, swirl around as if dancing. Fog hangs low, clinging to the rough surface of the tar covered road, so thick you can't see five feet in front of you. In the distance you hear a wolf howl as if its sending a message to the silent wood containing it. Your heart beating faster, and scared for you have no flashlight, you look to the sky hoping for the warm glowing comfort of the moon. But at last the ball of a ghostly white does not hover above, for the moon is dead, just like it has been for the past century. Looking back down towards the lifeless neighborhood before you, you see something that catches your gleaming eye a green metal lamppost. It provides scarce light, however it is just enough to calm you as quickly as you were frightened. You slowly, and steadily start towards it gradually getting closer. Stopping just close enough to touch it, you reach your pale white quivering hand out to touch it, to feel its warmth, when it go's dark in the hallowed world. All lights have been exterminated and you know all the hope has been drained from the world. 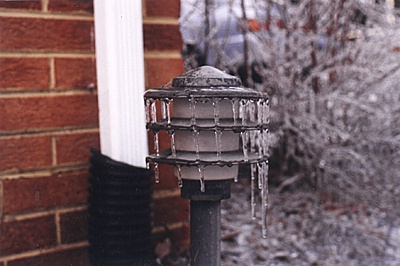 The author's comments:
I wrote this after looking at a lampost/
Post a comment
Submit your own