Once upon a time, in a green and grassy pasture, there lived a gray cat with very large golden eyes. She answered to the name of Jennifer. She was a mamma cat with a great big family of twelve kittens. The first ten of her kittens and the last kitten were solid white, but the eleventh kitten had a calico coat of many colors with big bright, round golden eyes. Her name was Josephina and she was Jennifer’s favorite kitten. Unfortunately, all of her siblings were very jealous of her and her beautiful calico coat of many colors. As the other kittens grew older, their jealousy grew for Josephina and her beautiful coat of many colors.

One breezy day in the middle of October, the kittens were chasing mice out in the pasture. While they were hunting, their jealousy for Josephina and her coat grew too strong. They realized that now would be the perfect time to get revenge on Josephina. So all the other kittens got together and came up with the best plan their little heads could think of. They set their devious plan in motion by chasing Josephina into a deep, dark pit in the ground and left her there.

They returned back to their mamma cat, Jennifer, to deliver the tragic, but untruthful news. When the mamma cat questioned why her favorite kitten, Josephina, had not returned with them, they replied by telling her that the biggest hawk they had ever seen swooped down and snatched Josephina up. Jennifer cried out “Meow! Tell me it isn’t true! Not my favorite Josephina, with her beautiful coat of many colors!”

Jennifer cried and cried for many, many days and nights and she just couldn’t get over losing her favorite little kitten. Luckily one day a farmer who was herding his cattle in the field where the kittens had been playing, heard the faint, desperate cries of a small animal. The farmer believed that it must be an animal in trouble, so he set out to investigate. The closer the farmer got to the pit in the ground, the louder the crying became. Suddenly he realized he was very close. Looking around, he couldn’t see anything. Then he looked down and he discovered a deep, dark hole with two round, golden eyes staring back at him and crying out “Meow, meow!”

He bent down and scooped her up in the palm of his hand. She was cold, wet, trembling, and hungry. He held her close to his chest and each of them could feel each other’s heartbeat. He took her home to his humble farmhouse and she was forever loyal to him for this act of kindness. They became great companions and developed their own language between each other.

One morning while taking the cows to the pasture, the farmer tells the kitten about a dream he had. In his dream he saw seven of his crops growing to the sky, but then they were replaced by seven crops dying and shrinking. Josephina listen and told him that the seven crops growing towards the sky meant that he would have seven years of prosperous crops, but the seven crops shrinking and dying meant seven years of crops dying and not being very prosperous. The farmer asked Josephina what he should do and Josephina replied “Save your crops and take very good care of them. Don’t eat as much of them and don’t sell all the extras to the markets. If you do this you should survive the seven bad years.”

The farmer was very grateful for the great advice. He saved his crops all through the good years and the farmer and Josephina survived the seven bad years. Then they both lived happily ever after forever. 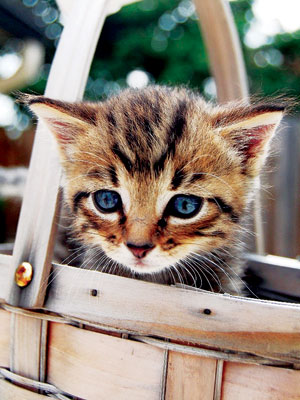 The author's comments:
Inspired by the story of Joseph and his coat
Post a comment
Submit your own