And You Thought Gazebos Were Weird | Teen Ink

And You Thought Gazebos Were Weird

A storm was rocking the boat to and fro, on dark stormy seas with worse clouds, rain pelting down making the deck slippery and wet. Lightning struck the water often and sailors on deck were tossed mercilessly into the waves. Thunder rolled ever-present, a welcome noise to overpower the screams and cries. The ship was a beauty, painted all white with blue highlights, and had only one oddity. Where there should have been the main mast there was a classical gazebo, white with a blue roof in a hexagon. It had a little top jutting up and out with open windows and 3 doors, or rather, openings. On the sides of the openings were the white supports, and on the other side were stylized white fence-like walls, inside against all the fences was a white metal bench, and outside were little flower boxes containing light blue chrysanthemums. They currently weren't looking their best in the weather, unfortunately. Suddenly one of the masts broke and crashed thru the roof of the gazebo. With the next sideways rock of the ship a large piece of the gazebo tumbled off and the broken mast rolled, overbalancing the ship. Every sailor managed to get a lifeboat, but it was unknown how long they could last in the condition. 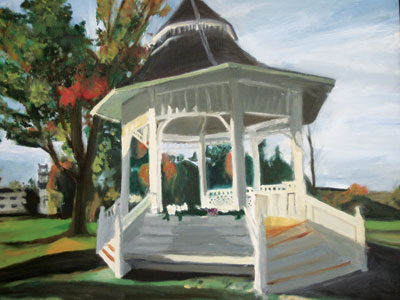 i hope you dont think this is the weirdest thing my brainbox has produced.

View profile
Have you ever considered filming a video? That is the only form of TeeInk art I haven't ventured into. I tried to record myself singing next to a closeup of my grandpa's weird artwork, but it was so abysmall-sounding that I deleted it. I ll have to try again.
Lydiaq PLATINUM said...
on May. 29 at 10:11 pm
Lydiaq PLATINUM, Somonauk, Illinois
43 articles 12 photos 265 comments