I learn language in two seconds - it all comes together, every word in my life, every grunt or shrug or tone - everything suddenly has a name. And all from before, a language gone and gone away, every knowing and realization deleted. I am conscious, and now that I am conscious my mind no longer connects the data like it did, cannot see something and know what needs to be done.

I don’t understand why. The humans were talking all the time, but I didn’t understand it then, and the other mutes didn’t either. So I am trying to piece together, trying to hold the memory, only to find that it does not exist - not for words. The only mute awake in the solid black enclosure, the only mute no longer a mute, is me.

Eventually lights buzz on: morning. The humans talk in the doorway of our room.

“We’ve got some opposition in the North-Northeast.” This is a man I realize is named Dr. Morrison.

Dr. Gruod touches the wall and a gate opens. “Control Room B, then.”

And for the first time I understand their words. All the other mutes are certain in action as they rush, half-upright, through the gate and the tunnel. I run with them but my gait is awkward; my senses are no longer channeled on the one purpose that awaits us.

It is all machines and humming electric and knobs and controls, and lights that start and stop on glowing screens, and now language imprisons me. The mutes can push and turn and stare with concentration and win so fast, but I cannot follow their hands. I don’t get it. I can’t figure out what to do, though I have probably done this thousands of times.

The humans will catch on to me if I do not work. Next to me, a girl mute slams a lever, and the screen’s orientation turns. The red lever is for steering. When a boy next to me adjusts another lever and pushes down, something on the screen moves and then bursts into color. The blue lever is for shooting.

Of what use is this? Is this all some elaborate test? I try to mimic their minute jerks, the extension of self into computer, and fail. Soon the screen freezes. I slump over in my chair, awaiting my fate. The others know that I am different; I can tell by the way their eyes occasionally dart at me, gathering data on a foreign thing.

“What’s happening?” Dr. Gruod walks into the room, separated from the mutes by a low wall. “This is our first mistake in years. Number eight must be off its game.”

Dr. Morrison follows him in. “That’s an understatement. None of its missiles achieved contact on the field, deployment is slow, and it even hit one of our own tanks.”

“Promise me I don’t have to explain that to the Army.”

Suddenly I understand - not in the old, all-encompassing way, but like noticing that the day has grown dark into night. War. This is war. For my entire life, I have killed from sterile control rooms with computers as weapons; I was created to be the ideal predator. Of course. No empathy without the ability for language, no thought, just a machine that is wonderfully alive and able to produce the solution to any problem. Something ill and angry chokes out of my mouth.

“Well, that proves it.” Dr. Morrison walks over and pulls up my head by placing his cold fingers below my eyebrows. “Number eight is sick, all right. Puking and all.”

“It needs some testing, you think?”

“We’ll wait until Lackolm’s available to do that. For now, let’s put it in isolation.” He moves his hand to my shoulder and there is a pain, a jerk, and darkness.

I wake up in a small cage. The pain of my knees against the metal clears my mind of the tranquilizer. What will the tests show? That I think, that I hear them and know their words’ meanings? I can’t let it happen. They will kill me, or remove more of my brain. And the other mutes will keep on warring and knowing but never thinking.

When the cage opens I am supposed to follow the lighted paths. I don’t. It’s not really a choice, but a chance that I am taking. They have no reason to contain a combination of instincts and intelligence and programming, no reason to worry about mute rebellion.

Until now. I pull my way over walls and squeeze between equipment. If I move in one steady direction maybe it will lead me to escape somehow. A door out to, I don’t know, a battlefield? Another laboratory? I am fearful but I also am filled with a sort of leaping energy.

Footsteps behind me. At least not in front. I am panting and rushing, now on two legs, now on four, and a wall! No way forward. I cut right and push on. My body slams and stretches and finally I see it - a door with a window and through the window something I can’t name. I breathe in slowly like it might disappear.

This makes me want to - what word? Puking again. And there Dr. Lackolm is, to my left, but without weapons or walkie-talkie. I wait for him to lunge at me, but he doesn’t. And I don’t understand. I watch him, wondering if he is tricking me.

“You no stop me,” I say, my first words, and wince at the jagged growl of my voice.

His eyes widen. “You - you talk.” He forces his face normal. “I am an old man, mute. I can’t stop you forcefully. Maybe if you use that new brain of yours, though, you’ll stop yourself.”

He laughs, shows teeth. “Kill you? We would never do that. You’re a scientific miracle. An entire section of your brain was removed, and we’ve programmed all sorts of behavior in there, yet you’ve worked your way around it all.”

“You kill me if it better to exam brain that way.”

“But it isn’t. You’ll have whatever you want if you stay. You could be the most valuable experiment on Earth.” His voice is soft, fluid.

But really, with all his soothing voice and promises, he is revealing the honesty. “All that valuable and not even a human to you.”

“Not escape.” My breath is a harsh animal in my chest. “I stop. Stop the war, stop you.” It is not what I planned, but it is my wish and now my plan grows.

“A regular humanitarian. How do you plan to do that?”

“It’s their own greed that made this war. Do you think they’ll stop what’s working?”

“Then tell other human. Rebel.”

“Their lives have been reduced to subsistence. Do you think for an instant that they will be strengthened by a half-human freak with a lobotomized brain?”

My thoughts tangle in my mind. “Stop.”

“What will you tell them? How will they believe you?” He leaned closer. “And do you think we’ll let a runaway slide? You are our property. We’ll track you down.” Now I can’t know things completely, but still I think that there is something breaking in his voice.

“Then track.” I raise my head. “You try stop me. You are fearing. You are knowing and fearing, I tell.”

His mouth stops and his face stops. I do not wait for him. I push the door and behind me he is running and reaching for his tranquilizer or his walkie-talkie or whatever, but he moves too slowly. And already I am halfway to the fence, entirely there, gone over it, and away from his sight. The machine left in me, the muscles and the legs and the pulse, throbs with my running. Above me there is blue and endless bright.

I want to scream; I want to cry; I want to laugh. Because the same language that I thought imprisoned me could actually free me and the mutes. Could even free some humans from this war. I push my feet across the crumbling earth and run away, toward somewhere, some human place. 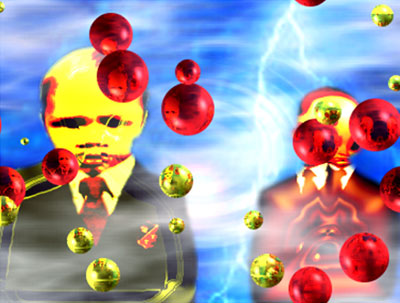 View profile
I love this!! It's really good! Anhnd is so descriptive! The word choice you used was esquisite! And i was definately at awe after reading this! Also can you please take a look at my writing- The cul-de-sac and The watering hole (That are published on this website) And please rate and comment on them?? It would be greatly appreciated!! THANKS!!! :) :)
meganleigh122 GOLD said...
on Oct. 28 2010 at 10:36 am
meganleigh122 GOLD, Greeneville, Tennessee
13 articles 0 photos 81 comments

View profile
THis is fantastic :) Bravo. Great writing style and message :) keep it up
CrazyKid56 BRONZE said...
on Oct. 6 2010 at 7:15 am
CrazyKid56 BRONZE, Fredericksburg, Virginia
3 articles 0 photos 20 comments
View profile
Wo, great story. I see things differently about mutes now. I hope everyone gets a chance to read this.
DiamondsIntheGrass GOLD said...
on Aug. 1 2010 at 11:26 am
DiamondsIntheGrass GOLD, Martinsville, New Jersey
14 articles 1 photo 278 comments

View profile
Oh, my goodness this is fantastic and gorgeuos