Favorite Quote:
Few will have the greatness to bend history itself, but each of us can work to change a small portion of events.
-RFK

Bravery wasn’t a word I heard often growing up. My parents protected me, their only child, by teaching me that safety was the priority of everything I did. Well, that message sank in a little too deep. As a toddler I glared at strangers and avoided sports or games that involved taking risks. No skating for me since I feared falling. No jumping off swings or I may crack my skull open.

But more than physical pain, I feared embarrassment. Expressing my opinions felt too dangerous, since my thoughts might not be validated. Talking to a stranger was perilous because I could be ignored. Images of my chagrined and incompetent self filled my head every time I spoke to a crowd. Whether it was a physical risk or an emotional one, I avoided them at all cost. I spent the first eight years of my life in a fluffy, warm, and safe place called the Comfort Zone. In that lovely space, I avoided trying new things, meeting new people, and dealing with embarrassment. Yup, my Comfort Zone gave me security, but it robbed me of many other things. Not taking any chances prevented me from pursuing what I loved.

The first time I fell in love I was six years old. That was when I saw my first play. Seeing actors a couple meters away made me feel included and captivated. My eyes followed their every move, as I breathed the story they presented. Each smile, each laugh, each line of script seemed directed at me. In those moments, I saw something rare – passion.

Those actors became the characters they performed. I realized acting is more than entertainment. It is a journey where actors communicate with playwrights from countless times and places, building empathy through connections with the playwrights’ creations. And as the character and actor become one, they share the journey by performing to an audience. I yearned to experience that journey myself. Deep down, I knew I wanted to act.

Too shy and scared to try anything new at the time, I remained a spectator for two more years. The mere idea of performing onstage sent me into a panic. As a kid who couldn’t talk in front of more than three people or ever raise her hand in class, being onstage in front of hundreds terrified me. But when a group of friends shove you into the gym to audition for a play, you can’t really say no.

Every year, my elementary school hosted a theatre company to organize a performance. Almost our entire school would audition, so two of my friends pushed me to go with them. I was scared to death, but at the same time, I was secretly glad to be there. I stood in that gym full of kids, waiting to be called. This was as far from my Comfort Zone as I had ventured in my eight years of life. My hands trembled. My head started to hurt, and my stomach felt like a tub of acidic snakes. I couldn’t do it. It didn’t matter. I was ready to spring out of the claustrophobic gym, but a tall, smiling woman motioned me over. In that second, I decided to walk to her instead of out the door. What made me change my mind? Love. I loved theatre enough to take a risk.

The two directors greeted me and started to describe the main role of the show, Cinderella. The more I listened to how strong, kind, and beautiful this character should be, the more I felt a connection with her. I imagined how a girl like Cinderella would feel and how I could relate to her hardships and pains. I wanted to be strong like her. I wanted to be kind like her. And when the lines slipped out of my mouth, I realized that I became Cinderella. No longer was I a shy fourth grader – I was a beautiful girl destined for happiness. I loved the feeling of bringing a character to life. During the audition, I was flooded with a confidence I had never felt before.

Waiting for the results, I felt self-doubt and shyness slam back into me like an explosion. I told myself that I would be happy with any role. All I wanted to do was perform, and if I had to perform as a tree, I would do so willingly.

The directors started announcing the roles. First, they announced the forest animals. I squeezed my hands, praying my name would be called. Ten names were announced, but not mine. Next, the names of who would play the lords and ladies were called. Again, I was disappointed. At that point, I had given up. I wasn’t good enough. Silently, I sat in regret and sadness as more roles were shouted out. I felt steamy tears bubble up in my eyes, so I looked down at my feet.

A knee nudged my leg, and I looked at my friend. She smiled like it was her birthday and squeezed me in a tight hug. I was confused. I looked up and saw every pair of eyes in the gym looking back at me. The same tall lady smiled and motioned me forward. I was handed the script for Cinderella. I had been so trapped in my little world of sadness that I hadn’t even heard my name. But I had landed a role – in fact, I had been given the main role.

In the next month, theatre transformed that shy fourth grader into a girl with confidence and a willingness to try new things. When I acted onstage as Cinderella, I felt relieved and free since Cinderella was so different from the timid little girl I was. For the first time, I felt happy with what I accomplished.

During the process of shedding my cocoon of self-doubt, I met new friends who encouraged me to be myself. As I spoke onstage, I would see my peers’ eyes light up in the audience and smile. Every time I saw that, I knew I loved acting. It made my life better.

Theatre showed me that I’m capable of making friends and having faith in myself. I realized if I could be free onstage, I can be free outside my Comfort Zone as well. 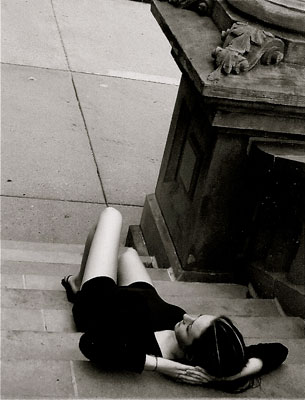