The morning air made my fingers cold as I walked into the gym. I could hear the telltale sounds of an orchestra warming up. The middle-school orchestra had come to play for us, and the piece they performed was Brandenburg’s Concerto #3 in C Major. I fell in love with that piece, and even though I was only a fourth-grader, I vowed to play it one day.

At that point, I knew little about music, but I loved the way it sounded. Following that assembly, I immediately went to the sign-up table. I looked at the many instruments and didn’t have any idea which to pick. They all looked the same. I did notice that the viola was the least chosen. So I signed up for it; the viola to violin ratio was astounding. I was, however, content with my choice.

Our first day of rehearsal, my young mind was shocked. The orchestra had 14 violins, two violas, and one cello. It was a rather pathetic little group, but we all had one thing in common: we loved our instruments. We played through "Mary Had a Little Lamb" and "Hot Cross Buns" with a lot of difficulty, but still we played. We had heart, which is so important when playing an instrument.

I kept playing though elementary and middle school, and finally I got to high school. I got my first viola for my birthday freshman year. (Previously I had used school rentals). It was Hungarian, and didn’t have the best tone because I hadn’t learned to break it in, but I eventually did with my first private teacher. I took lessons at the Pasadena Conservatory of Music during sophomore year with an experienced violist who played in our local symphony orchestra. She taught me to hone my skill, and I’ll always remember when she said, "You have the skill, Evan, but you lack the will power." Those words motivated me to practice more and become active not only in my school orchestra, but also in school itself.

Now a senior, I have been playing the viola for eight years. I have almost given up many times, and had it not been for the persistence of my family and teacher, I probably would have. Playing the viola has helped me with many skills, including my level of responsibility. It has also helped me to organize my thoughts and my life. Learning the viola also prompted me to begin an entire life dedicated to music. I have learned the guitar, drums and bass guitar with help in no small part as a result of my experience with the viola. It has truly led me down a musical path, and I trust it will continue to do so for years to come. - 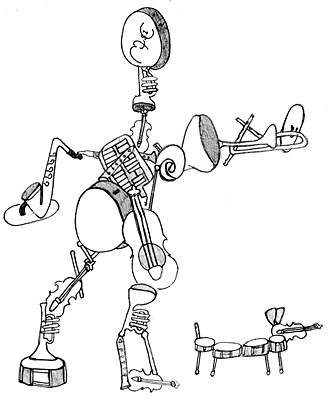 Favorite Quote:
"Life can suck, sure. Mostly though it's a blank canvas. If you want to see something brighter in it, you might have to add it yourself." -Patrick Stump, Fall Out Boy

View profile
I'm a proud viola player and I relate so much. I also joined in fourth grade for similar reasons and have been playing since then. Music demands hard work but it's so rewarding. Great piece!
bandgeekfreak DIAMOND said...
on Jan. 5 2012 at 10:19 pm
bandgeekfreak DIAMOND, No Answer, Texas
59 articles 0 photos 30 comments

Favorite Quote:
“A musician must make music, an artist must paint, a poet must write, if he is to be ultimately at peace with himself.” Abraham Maslow.

View profile
I'm a percussionist, along with a couple other instruments. I know what it's like to give up hope on an instrument, but music has saved me so i don't give up. I love the piece. Keep writing:)
Alisha62293 BRONZE said...
on Nov. 1 2010 at 7:56 am
Alisha62293 BRONZE, Warwick, Rhode Island
2 articles 1 photo 30 comments

Favorite Quote:
"A man who dares to waste one hour of time has not discovered the value of life." Charles Darwin

I am a violin player, along with about 11 other instruments, and i know the feeling. It is hard to be different, in your case the viola, even if you are happy with your choice. I am glad you stuck with it, we need more fine viola players in this world =)

best of luck to you!