A Tea Party At Two MAG

While an afternoon tea break was a normal occurrence for ladies in Victorian England, it is a rare treat for me and my friends. Last summer, my friend, Hilary, who lives in an old Victorian house, complete with a parlor and an old-fashioned bathtub, invited me to a tea party at her home. It was delightful. I felt like I had stepped into a scene from a Jane Austen novel.

My friends and I planned the party for a month. I found the perfect outfit. Yes, it was a modern dress that I purchased at the mall, but it would probably fit right into the Victorian era. Normally, I eschew materialism; I believe that beauty comes from within. However, my guilty pleasure is nineteenth-century British apparel. While I love movies like “Becoming Jane” and “Bright Star” for their poignant depiction of the great literary figures Austen and Keats, I find myself absorbed during these films in the details of the dresses, because they were simply gorgeous. Jealousy grips me; I want to wear those gowns too! This tea party was my chance.

When I arrived, I was greeted by friends who had come early to set it up. They had laid out Hilary's best china, and placed a vase of flowers on the dining room table. There were cucumber and cream cheese sandwiches, scones, cupcakes, all kinds of cookies, and, of course, English tea. I handed Hilary the ginger snaps I had baked, and we all sat down for tea.

We had a great discussion; because it was the middle of summer, many of my friends had just returned from trips, or were about to embark on them. Our conversation was intertwined with literary references to Modernism and Romanticism, since my friends and I had all grown close during our Honors English class. We share a love of literature, and even when we talk about silly, trivial things, we tend to refer to characters in our favorite (or least favorite) books. I remember saying that I felt like Edna Pontellier from The Awakening at that moment, because she was a nineteenth-century housewife.

Of course, at some point the conversation turned to college and our futures, as it did fairly often. But when the topic came up, we groaned and changed the subject. That day, we didn't need to consider the future. We were having fun pretending we lived in the past, but more importantly we were experiencing the present.

I was a part of a group of people who cared about each other. We laughed together, we listened to each other, and we supported one another. For a moment, having my friends around me was all I needed.

This essay was meant to be read aloud in the Queen's English. 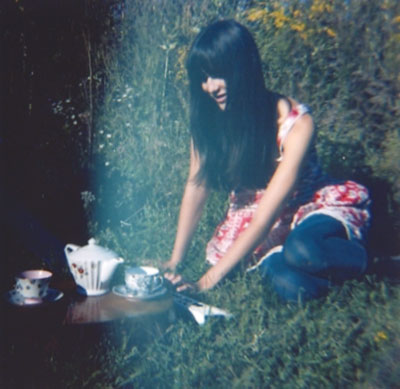 I love this essay, because it's vivid and cute and i think you really mean a lot of what you say. Sure, it can get a bit self-serving at times (you dont need to stress your love of literature, it will come across in the way you write and in little details) but I love the idea of a Victorian tea party and the ending is excellent. The second to last paragraph seems to let down the reader a bit-- try and make it more original and vivid, concrete (we leaned against one another, supporting each other's weight literally and metaphorically).

love this though, you seem like a really interesting person!!