When I Grow Up I Want to be Spongebob Squarepants

"When I grow up, I want to be Spongebob Squarepants."

Those are the words I triumphantly declared in first grade when my teacher inquired what career I planned to pursue. In what I assumed was utter admiration, my teacher chuckled upon hearing my unusual wish.

The instant my teacher uttered the words "you can't," my tortilla-colored ears perked up. Pursuing goals I'm told I "can't do" is my perpetual pastime; Proving people wrong is my timeless hobby. Consequently, my teacher's candid feedback motivated me to pursue further my naive dream of becoming Spongebob.

In first grade, I had two simple needs: chocolate milk and Spongebob. With one hand on my choccy milk and the other on the tv remote, I watched Spongebob with starry eyes for hours on end. Spongebob's character deeply resonated with me; I idolized his constant smile, distinctive laugh, and quixotical personality. Because I loved Spongebob to the very pixel, the idea of becoming Spongebob encapsulated me profoundly.

The first proceeding I took to become Spongebob was learning his smile and laugh. Spongebob has a unique laugh that sounds like a high-pitched siren combined with a deflating balloon. His white buck-toothed unceasing smile is equally abnormal. Every morning from first to third grade, I stared in the mirror, practicing the smile while nailing down the laugh. To keep my smile constant, like Spongebob, I used my fingers to force my smile. Eventually, my Spongebob smile and laugh became instinctual.

Next, I figured that to become Spongebob I needed his personality. After copious studying, I found that three traits encompass Spongebob's personality: energy, amiability, and idealism. All my actions were under these traits for years. I laid the new Spongebob me: the "better" me in place of my own identity.

My peers gradually noticed the distinct changes in my character as I learned to mimic Spongebob better. Classmates recognized my continual smile and "sunshiny" personality. During this time, I would buy snacks for my peers to seem "amiable" like Spongebob. My classmates, of course, loved this, but over time I forgot about my own well-being. I frequently had no lunch money for myself after spending it all on classmates, making me wish I had kept my money. Hungry, I realized that although I loved Spongebob, I loathed not being myself. I enjoyed making others happier, but sacrificing my personal fulfillment by changing my identity left me exhausted. Ultimately, after years of effort, I decided to forget my dreams of becoming Spongebob. I didn't want to be him anymore.

The sudden closure of my quest to become SpongeBob was not an instant of perceptiveness but the onset of enlightenment. I realize now that I desperately desired to become Spongebob not only because I loved him but also because everyone loved Spongebob, and I yearned for the same attention. In the pursuit of social admiration, I constructed an over-idealistic personality that I couldn't fulfill. My parents always taught me to be the best version of myself; I thought this meant I had to change myself for the sake of pleasing others. Now, as I enter adulthood, I realize that our endeavors to change who we are for public validation obstruct us more than any roadblock.

When I grow up, I want to live wholly liberated from the chains of society. The future education I receive will never be for the approval of others but my own. The future journeys I pursue will never be for the commendation of society but the fulfillment of my passions. While I no longer seek to become Spongebob, I still have the same corny smile ingrained on my face; the same bizarre laugh that continually turns heads; the same over-idealistic personality that irritates everyone. This isn't Spongebob; this isn't who others want me to be; this is who I want to be; this is me. 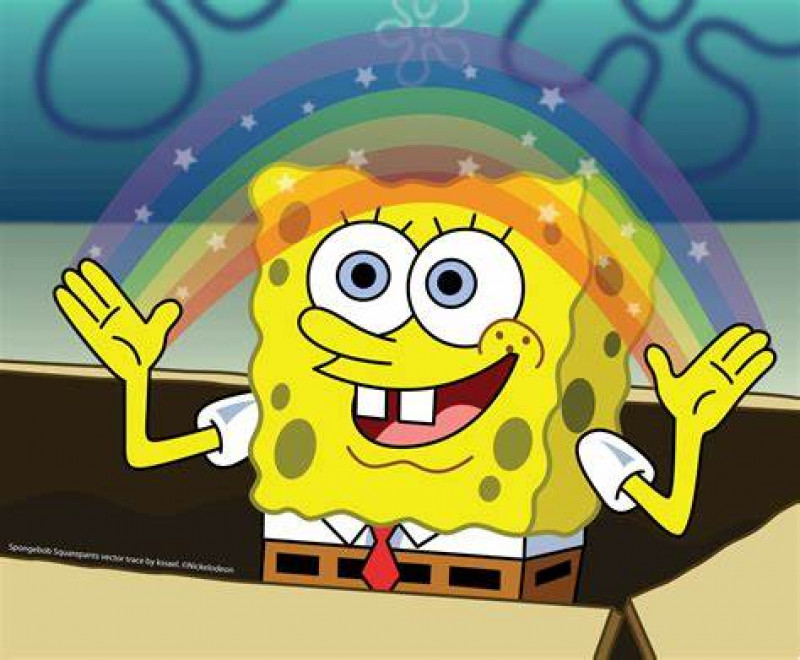 This story shares my experiences in grade school where I dreamed of becoming my idol, Spongebob Squarepants. I hope that readers can resonate with my message so that as a society we can learn to always be our true selves.