Ever wanted to see Michael Jordan play against the modern day legends? Well here is your chance! There has been many NBA 2K games going around in the past years. From the first ever NBA 2K99, to the present and most marvelous, NBA 2K11. 2K sports have been improving every single year from the graphics to the audio in the game play. The movement of every player has changed so much. The players in NBA 2K11 actually cross over from one hand to the other while in other 2K games such as NBA 2K3, they look like a robot going from one side to the other. NBA 2K11 has taken a big step to a new era!

NBA 2K11 consist of many features and game modes. They have a game mode called NBA Blacktop where you can either play pickup games, three point shoot out, and the Sprite Slam Dunk Contest. These game modes are really amusing because it adds more addiction to the game. The most important game mode is for the great legend, Michael Jordan. It is called the Jordan Challenge where you play through Jordan’s career. You play through games like the “Flu Game” or the “Shrug”. While you play it makes you feel as if your really in the game and going through what M.J. went through. Sixty-three points in one game! Unbelievable! Everyone always has the urge to complete the 10 Jordan Challenges just like me because when you do complete them you get to go through the 2011 NBA Draft with Michael Jordan and put him on any team that you want. I myself would put Jordan on the Lakers. I would pay anything to see Kobe Bryant and Michael Jordan play on the same team. Another benefit for completing challenges is that you will unlock new Jordan shoes that will add beneficial stats to any player you put them on.

The graphics of this game is very amazing! It is like you are watching it live on HD TV. I remember I was playing it and my 11 year old brother thought that I was watching a basketball game on television. It is astonishingly clear. The player’s faces look exactly how they are supposed to and the fans out on the seats look like actual people. Before each game, most of the star players do a little something for the fans just like their normal routines in real life. For example, Lebron James does his signature theme where he throws powder up in the air and Kobe Bryant has his handshake with Sasha Vujacic. I would like to add that when you are playing at the Bobcat’s stadium or any other bad teams’ stadiums, there are not much people in the stands, but some fans come in the middle of the first quarter for a number of of these teams. It is very intriguing how the players form on their shot looks very much alike their shot in real life. The team’s play calling is also very persistent and easy to use. When you call out a play the movements of the players is very accurate and precise. While you play this you actually get into the game and you feel like you start getting “on fire”.

Sure, there are a few little mistakes along the way. Kobe Bryant looks like an alien and
Don Nelson looking like a melted marshmallow. To me I think the good things out passes the bad things by a long shot. NBA 2K11 is the best game ever made. 2K Sports came out with the best and they are still moving forward. It is really impressive how they brought all Michael Jordan’s history into one game. 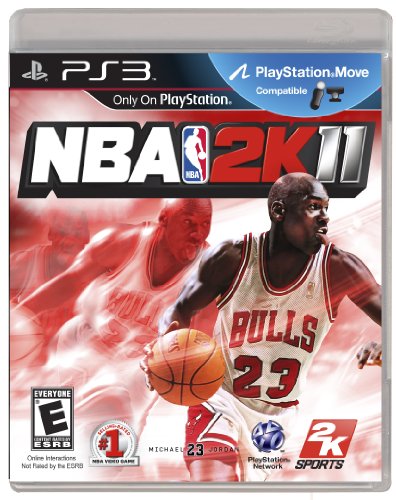 
Buy from Amazon
The author's comments:
I was inspired to write this review because they brought back the lengendary and my second favorite player, Michael Jordan!
Post a comment
Submit your own