Eve 6.Metallica. Third Eye Blind. Counting Crows. Athenaeum. Barenaked Ladies.Angry Salad. Although the last band may not sound familiar, there is nodoubt that one of the next big pop/rock bands will be named after iratevegetables.

The show started 10 minutes late, but theband delved into "Even If" right away. The set and lightingwere sparse, but the music overpowered the auditorium. The first thing Inoticed was Bob Whelan's strong voice; it seemed to be a mix of AdamDuritz's (Counting Crows) warble and Eve 6's tonal strength. Whelan hasa full and rich range.

After the first song, the band introducedthemselves. The members were humorous and affable, evoking a realrapport with the audience. Whelan told stories before almost every song.The band showed enormous versatility and musical range throughout the45-minute set.

"Coming to Grips" is a radio-friendlytune about Whelan's experience with a girlfriend who tells him she's alesbian. "She tells me that 'I don't like boys,' I tell her I don'tlike them either," he sings.

"The Milkshake Song" is undoubtedly AngrySalad's most well-known tune, garnering extensive Boston-area radioplay. It is a light but satisfying and catchy song.

"HowDoes It Feel to Kill" really shows the strength of the band as awhole. It's hard-rock and very drum-driven, displaying Hale Pulsifer'stalent. There are also featured guitar solos, reminiscent of Guns N'Roses.

"Rico" is an incredibly sad song about afriend's car crash and death. It starts off quietly, with distinctive,stirring guitar work, evoking Metallica. Later, the song grows stronger,with a lingering and entertaining melody. Angry Salad closed on a highnote with their new tune, a cover of Nena's "99 Red Balloons."The approving audience sang along.

Angry Salad entertainedquestions for about an hour after finishing their set. The band hasdepth and a distinct personality. Besides the name, whose origin canonly be discovered by asking the members personally, the band does nottake themselves too seriously.

Their lyrics are simple yet witty("And she gave me a milkshake and a kiss/I don't need a whole lotmore than this"), but the quality arrangement of the vocals andinstruments make you think the words mean much more.

The membersare likable and funny; on-stage, they muse about Britney Spearsobsessions and the time they saw Kate Winslet. The audience erupted inapplause at the end of the show; they genuinely liked theband.

Amusing, gregarious, but most importantly, talented, AngrySalad is the happy future of music. Go buy their latest album,"Angry Salad." 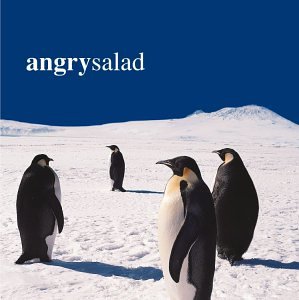 View profile
They sound interesting. I'll give them a listen, too :)