Bad Blood by Blood on the Dance Floor | TeenInk

Bad Blood by Blood on the Dance Floor

BOTDF’s career started out shakily. Dahvie Vanity had come out of another group that disbanded due to the other members’ not being able to tour like Vanity. BOTDF officially got its start in 20007, with the first full album, Let’s Start A Riot! That was also when the Slash Gash Terror Crew was born. The fan following is massive, even though BOTDF gets a bad rap.
The criticism goes deep.
Davey Boy, a staff member of Sputnikmusic, said in a review:
“ While Jayy Von Monroe's vocals are occasionally tolerable, Dahvie Vanity's are in desperate need of auto-tune - especially throughout verses where he approaches rapping and spoken-word. Seriously, you just have to listen to his delivery of "Every 14.2 minutes, someone in the United States dies by suicide" at the beginning of 'You Are the Heart' to understand how awful Vanity's voice is. ”
Perwell Fowler from Bring on Mixed Reviews said
“ Why review something that looks like an easy target you ask? It’s because there has got to be a better way to get the youth to know they aren’t alone in this world and to be confident enough to be free from bullying and depression, than listening to someone with a purple studded jacket and tiger whisker face paint. If you are a fan reading this, do yourself a favor and pick up a less offensive choice.”
In 2013, the album, Bad Blood, was released to expectant fans. It features the singles I Refuse to Sink and Crucifed By Your Lies, the latter being Vanity’s outcry against sex.ual assult charges that were dropped. But the album’s quality is outstanding compared to the previous albums. Vanity’s vocals are smoother, his screams less screechy. Now, Jayy Von Monroe’s vocals are even better. His voice is deeper and utilized to their full extent.
The ever-present se.xual messages have disappeared almost completely. Only one song is somewhat suggestive. The rest of the songs are inspiring in a way.
Bad Blood is by far Blood On The Dance Floor’s best work yet. 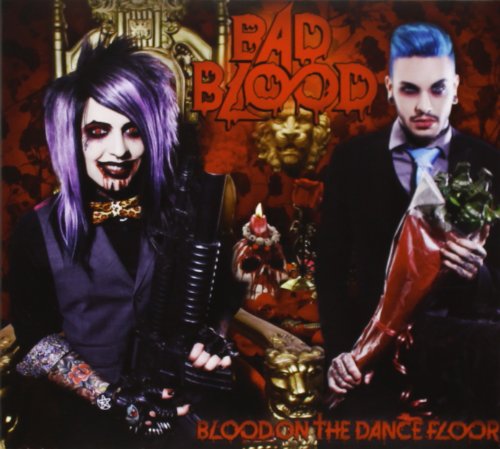 
Buy from Amazon Available on iTunes
The author's comments:
I got my Bad Blood album about two months ago. Since then, I've aimed to collect all of their songs! :)
Post a comment
Submit your own