Rust In Peace by Megadeth

Crawling from underneath the rubble of the maniacal 80's thrash metal movement, Dave Mustaine was king. After releasing 3 groundbreaking thrash metal landmark albums and enduring through numerous line-up changes, Megadeth finally hit it's peak. Megadeth came out of the 80's and straight into the 90's angrier and faster than ever before. They recruited top-notch musicians, hand-picked by Dave Mustaine himself, and went to work creating their Grammy-nominated record 'Rust In Peace'. With Marty Friedman, Nick Menza, and Mustaine's 2nd half, David Ellefson in tow, Megadeth blasted out hit after hit in this album. Songs like 'Hangar 18', 'Tornado Of Souls', and the infamous 'Holy Wars...The Punishment Due!' are still played and loved today. 'Rust In Peace' was recorded by Mike Clink. Mike was the only producer Megadeth had ever used who stayed with them during the whole recording of the record and never got fired. Lyrically, Dave Mustaine fired all cylinders attacking the US government and dealing with nuclear fallout. Songs like 'Hangar 18', written by drummer Nick Menza, dealt with the conspirist theory of the government holding alien life forms in a secret hangar, much like Area 51. This album continues to leave an everlasting mark on the metal scene today. In fact, Megadeth released a 'Rust In Peace 20th Anniversary' DVD and CD in 2010 to commemorate it's legacy. If you've never heard this album before, shame on you. I strongly suggest picking this up at your local vinyl store, CD store, iTunes, wherever you buy music! For, according to music expert Robert Dimery, it is one of the 1001 albums you must hear before you die. 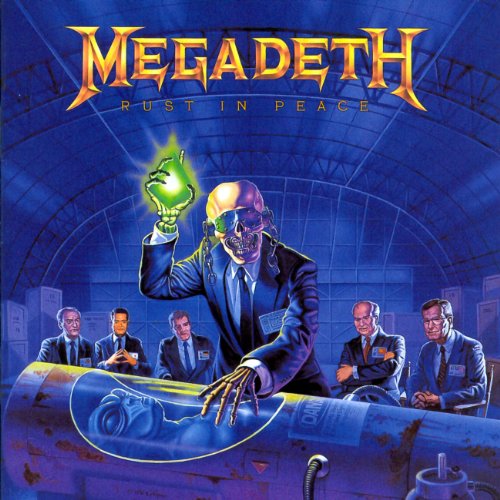