Favorite Quote:
“What I want is to be needed. What I need is to be indispensable to somebody. Who I need is somebody that will eat up all my free time, my ego, my attention. Somebody addicted to me. A mutual addiction.” —Chuck Palahniuk

After a nearly 4 year hiatus (with the exception of 2011’s digitally downloadable 4-track promotional entitled <i>Singles Club</i>), Paramore is back with a self-titled album that has got everyone’s ears standing at attention.

A new sound and a new attitude has earned this reconstructed band both praises and ills from fans of their previous work, while critics contribute overwhelmingly positive sentiments. I will be the first to say that no one person is completely wrong in their assessment of <i>Paramore</i>.

Before delving into the album’s positives and negatives, one must understand the context of this band’s eight year stint in the music industry. Signed to Atlantic Records subsidiary rock label Fueled by Ramen in 2005, the band released their first album <i>All We Know Is Falling</i> the same year. <i>Riot!</i> and <i>Brand New Eyes</i> followed in 2007 and 2009 respectively.

Paramore started to experience internal shakiness that culminated in the departure of members Josh (rhythm guitar, co-writer, and backing vocals) and Zac Farro (Drums), brothers who were founding members of the band. The departures came in December 2010, right before the band was scheduled to embark on a South American Tour. Bitter media chaos ensued, but Hayley Williams (lead singer, co-writer) assured the world that Paramore would go on.

That sense of hope in continuity is what propels <i>Paramore</i>. The aptly titled “Last Hope” has Hayley and remaining members Jeremy Davis (bass guitar) and Taylor York (rhythm guitar) singing “And the salt in my wounds isn't burning any more than it used to/It's not that I don't feel the pain/It's just I'm not afraid of hurting anymore”. Here listeners get that the band will always feel heartbreak over what happened concerning their split with the Farro brothers, but they are done with the fear of pursuing longevity in the business.

Williams, York, and Davis throw all hope, energy, and resolve into Paramore, especially with the first track “Fast in My Car”. It is not their best work lyrically, but the rousing drum beat and use of techno synths (a first for Paramore) makes the song a worthy opener.

The biggest thing to note about “Car”, though, is its signal to veteran Paramore fans that this band is growing and changing—in big ways. Gone are the pop-punk days of Riot; mainstream rock and roll is now the name of the game.

Track nine, as well as the second single released, is “Still Into You”. Because of its poppy vibe and powerful bridge vocals from Williams, “Still Into You” is an easy Top 40 hit. This contradicts with what I said earlier about the entire album being a mainstream rock success, but hey, if alternative metal band Linkin Park can become a pop radio staple, why can’t Paramore?

Musical styling continues to have matriculated past pop-punk to include cross-genre influences. “Aint It Fun” sounds like a southern gospel choir decided to do a collaboration with 90s era No Doubt. On paper it sounds awful, but trust me it isn’t. “Part II” deftly intertwines past songs into probably the best song on the album. It serves as homage to old Paramore, as well as a clear part two to <i>Riot!</i>’s “Let the Flames Begin”.

And boom! Right when we thought all of 2007’s spunk had drained out like Hayley’s bright orange hair dye, we hear “Anklebiters” and “Be Alone” toward the end of the album. If those two songs are not what Paramore is about, then I don’t know this band (Of which I have been a fan for seven years now, thank you very much).

The Farro brothers left the bar high as far as lyric writing and drumming talent. In exchange for their absence we get synths and pushed vocals and raw—happiness.

Fourteen songs and three ukulele interludes later, <i>Paramore</i> is done. It’ll leave you with a “what did I just hear?” look on your face, but in a good way, I promise. 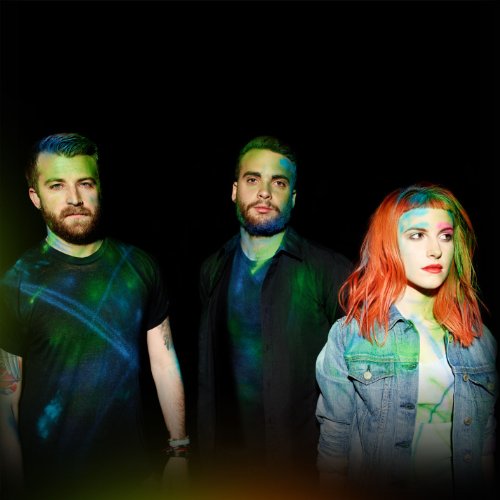 
Buy from Amazon Available on iTunes
The author's comments:
A review on Paramore's new number one self titled album. If there is an "<I></I>" it means that the title should be in italics.
Post a comment
Submit your own