The Winter of Mixed Drinks by Frightened Rabbit | Teen Ink

The Winter of Mixed Drinks by Frightened Rabbit

Frightened Rabbit is a band based out of Scotland, and therefore fairly new to the United States’ attention. This band has already released two albums, Sing the Greys and The Midnight Organ Fight. Now their newest, The Winter Of Mixed Drinks, seems to be the one taking the spotlight.

Scott Hutchinson, the lead singer, heads off the band with his nasally, whiny, and (for lack of a better term) Scottish-accented voice. Hutchinson seems in this album to have developed an aptitude for putting emotion into his words, contributing to the overall sound of each song.

The Winter of Mixed Drinks is indisputably the best Frighted Rabbit album so far. Highlighted with all of the bells and whistles, and maybe a touch of an odd instrument (bagpipes are even a possibility) here or there, it seems that the band has come together and realized the way every piece of a song can fit together.

It seems on this album that the band has propelled themselves towards a more developed sound with heavier climaxes and more interesting variations. The lyrics, instrumental ability, and vocal variation all has developed, and it’s thrilling to be growing along with this band.

Despite the lack of a song quite like the blunt favorite “Keep Yourself Warm” of Midnight Organ Fight, there are plenty of other favorites to fall into, that are truly more rewarding due to the complexity that forces the listener to really listen and evaluate.

While some songs on this album are not up to par when compared with the rest, it’s exciting to see Frightened Rabbit making a name for themselves, especially considering their upcoming U.S. tour. Enjoyable to listen to, this album keeps your foot tapping. 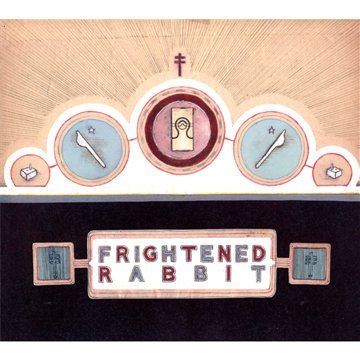