Living Things - Ahead of Lions


It has long been said that the art of punk-rock is far dead. If that's true, then no one told the boys of Living Things, four powerful musicians hailed from beyond the grave to revive the tradition of poignant lyrics coupled with progressive three-chord licks.

Born of some fierce personal and political fire, their debut album, “Ahead of Lions,” cast into the light the reality of our world as it stands in this day and age with a twist of cynicism and an intriguingly contradictory undertone of loving optimism reminiscent of the subtly hopeful stylings of Lennon.

Opening with the blatantly titled “Bombs Below,” the album starts with a kick toward the policies of the American ‘institution' of defense. Between its pulsating lead-in, dark and throaty vocals, and a distorted rhythm guitar, the song near plays itself off the CD and into the mind, painting a disturbing portrait of the realities of the American touch. The song is then followed by its counterpart, “I Owe,” a resounding demonstration of that “finding-your-way-by-the-dim-light-in-the-dark” optimism. Yet another tune centered in its rhythm over harmony, the song sounds the booming cry for love out from the pits of a despairing national agenda. These two songs represent the extremes of the album: from pure and utter disparagement to an uplifting score with an implicate message intended to transcend the ages.

A showcase of the genius and faintly perverse alike, “Ahead of Lions” ushers punk rock into a new era: one where terse and granular music marry with provocative and colorful opinionated rock ‘n' roll libretto to bring forth raw and uninhibited power of expression. In a strange, self-fulfilling prophecy, this album really does put Living Things ahead of the lions. 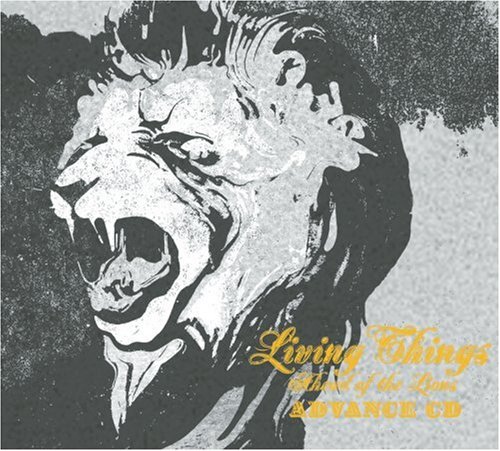