There are some animes out there like Spirited Away and Your Name that have pleasantly surprised me by being so unexpectedly good. This one surprised me too...but not necessarily in a good way. I knew something was off right from the very beginning when the first strains of the partly hard-rock soundtrack reached my ears, which judging by the time (1800’s) and place (Ancient Japan), absolutely did NOT belong in the film, period. That’s not the only baffling aspect of the plot, though. How about the undeniable fact that the film was really nothing more than a year in the life of the famous painter Hokusai's daughter, O-Ei, with virtually no storyline whatsoever, save a convulted subplot about a O-Ei’s sister, a blind little girl who eventually dies? Or the film’s ludicrous conclusion (all the characters continuing with their lives in much the same way as before, save a brief explanation of the rest of their lives and even an ironic CGI shot of today’s Tokyo), which isn’t even in the same galaxy as a satisfying or even sensible ending? I mean, sure, the artwork was beautiful (as always), but in order for an anime to really be good, it needs to succeed in both visuals and story. One can't exactly compensate for the other. And if you're looking for Princess Mononoke or Nausicaa-style thrills, you're definitely not going to find them here. The film's slow, monotonous, and more than a little boring. Add a comparatively (and surprisingly) graphic sex scene and some extremely bizarre fantasy sequences (both of which have absolutely no place in the film whatsoever) to the mix and you’ll have a film most teens will most definitely not be interested in. Even I was expecting a lot more from the movie (it’s plot especially). As I said before, the artwork certainly is nice, and the scenes with O-Ei and her blind little sister certainly are definitely tender (as well as heartwarming), but I would definitely not recommend the film to anyone other than die-hard anime fans. 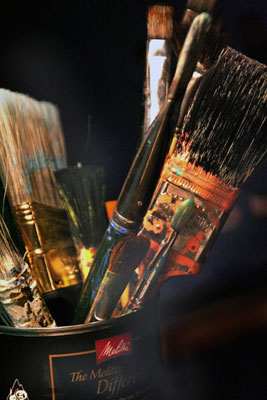