How to Lose a Guy in Ten Days | Teen Ink

How to Lose a Guy in Ten Days

Andie Anderson (Kate Hudson) is Composure magazine’s how-to consultant: but trapped by her peers’ demands for shallow material, she decides she wants to write about something more. Her boss promises just that after one more article, which will tie in Andie’s best friend coworker Michelle’s (Kathryn Hahn) personal experience with awful relationships—working in the field, Andie will write about how to lose a guy in ten days. Meanwhile, Benjamin Barry (Michael McConaughey) is facing workplace crisis: he has to find a way to hook a spot on the new De Lauer diamond ad, which is out to become the next big thing. But to get it, he’s presented a bet: he has to prove he can make a woman fall in love with him in just ten days. Chance flies, and the two meet; thus ensues a knee-slapping rigeur between the two. But somehow, something clicks. And what was supposed to last a week turns into something that could last much longer.

Leads in the operation, Hudson and McConaughey, are kinetic, immediately elevating this flick into something special. It wouldn’t be the same film without them. (I mean, obviously, but you get what I mean.) Not only slaphappy hilarious throughout, they convincingly make the film’s feats winkingly nod toward the chaos of real-life couples. The one enhances the other’s comedy and charm at once; the two are simultaneous eye candy and chemical success. Hudson, fresh off Almost Famous, illuminates Andie Anderson as a more-than-blonde blonde with the capacity to go crazy; McConaughey is a sleek Texan-fever romantic. (And now I won’t be able to take Interstellar seriously! If I ever do watch it. Thanks, Christopher Nolan.)

The whole setup is divvied out nicely between crazy funny and sophisticated comedy, too, playing out something like Billy Shake’s Taming of the Shrew, only classier, sassier, and with the modernity of a loud-mouthed New Yorker. While it might roll like a race between the archetypal Man and Woman, there’s still so much more involved—like the two individual personalities, who succeed in bracing cliché for the finish line. Heck, it’s like watching a friend, the storyline personal enough to be audacious and keep the stakes high. In other words, a rare and tasteful mix. We didn’t need to lose the guy after all. 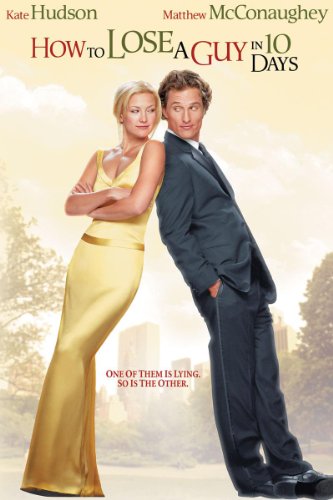