Beyond the Lights | Teen Ink

Noni Jean (Gugu Mbatha-Raw) has been combed for LA-style success ever since her sweet voice swung a small-town talent show back home in the UK. But she’s come a long way since; and under the harsh vigor of her mother Macy (Minnie Driver), she’s on the cusp of truly toppling the music industry. The only problem is, she can’t take it anymore. Drowning underneath the fantasy girl image people want her to be, she’s ready to take the final drop off a balcony to end her own empire. But good-for-good police officer Kaz Nicol (Nate Parker) isn’t willing to let her throw away her life. And Noni begins a new journey to discover what part of her was worth saving that night.

Given, it is glamorous. The costumes, trademark purple hair, and paparazzi nightmares seemed learned right out of a celeb “behind the scenes” featurette. And it sinks in as very, very real. At the beginning of the movie, Noni impersonates the very essence of music video diva we’re used to seeing twerk all over the Internet. She’s camera candy, and visually drop-dead gorgeous. But it seems trop ambitious, supposedly, to skim below the surface on this #flawless stage personality who dithers into wracking self-pity off stage.

Other aspects of the scenery seem a bit too perfect, too. Romance movie veteran Nate Parker portrays a youth so despondently chivalrous he loses luster. Sure, he’s police, but the character even seems to be running for mayor in the multiple dark, homey, and slightly confusing family pep talks he receives throughout the movie. There are multiple references toward the MLK and Obama books decorating his room. We get it, we’re supposed to like this guy. But only the later chemistry with Noni allows for that.

The realism finally kicks in when Kid Culprit (real-life MC Machine Gun Kelly) sexually harasses Noni onstage during their live performance duet. Apparently he hadn’t taken the backstage breakup well, and as he tries to snag off her already revealing stage costume off, Noni’s horrified reaction mirrors our own. It gets worse when her label later cuts her off, and her own mother congratulates her as turning out as another washed-up cliché. Wait, this isn’t the Hollywood we know, or much less want to see. And that’s where the cliché ends…

From there, the movie takes on Noni’s healing with strides equally graceful and feasible. Mbatha-Raw grows increasingly stunning as she lets go of the fake pieces of pop that have been glued onto her. The purple-streaked hair goes. And Mbatha-Raw and Parker’s romance is pure sugar; their undercover holiday over the boundary in Mexico is sweet, and smolders. Finally, Noni’s return to music (accompanied by full, authentic songstress power) delivers delightful shivers up the spine. She performs hauntingly empowered, without having to give up chastity, herself, or hope; so there is something beyond the lights after all. 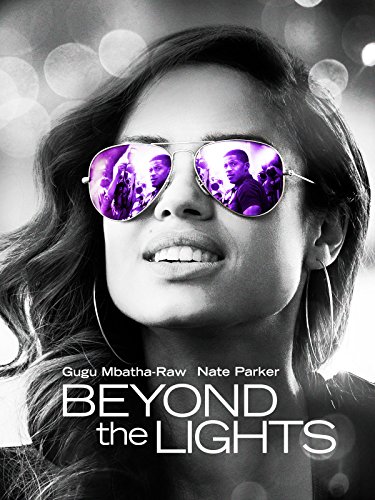