Night of the Museum 3: Secret of the Tomb | Teen Ink

Night of the Museum 3: Secret of the Tomb

It’s been eight years since the first Night of the Museum movie first came out, and now with the final curtain being drawn, it’s easy to say there will be some teary eyed faces.


It begins in 1938 when the Tablet of Ahkmenrah was found by a young C. J. Fredericks who accidentally fell into the tomb it was buried in. His father, who sponsored the expedition, wants to get the Tablet out before a sandstorm hits. Suddenly a crazed worker runs up to the boy, excitedly speaking in Egyptian. “The end will come,” he says. Sounds like a message to scare away fame seeking treasure hunters. Or does it hold an ominous truth?


Seventy-six years later, Museum of Natural History’s favorite night guard Larry Daley is getting everyone ready for a banquet being held for the opening of the museum’s new planetarium. Everyone is excited even Attila. Before it’s time to go on, Ahkmenrah confronts Larry about a problem with the Tablet. Strangely enough, it begins to turn green, but Larry brushes the matter off for the next night.


Finally the moment everyone has been waiting for arrives when Theodore Roosevelt rides up to introduce the new “special effects” of the planetarium which includes constellations of Orion the Hunter and a guest appearance from Dexter. Unfortunately not all goes as Larry planned.  When all the Museum residents start going haywire without any explanation, Larry must find out why the Tablet is changing which could lie with Ahkmenrah’s father. As he goes through the records of the 1938 expedition records, he comes across the picture of a small group of men and a boy, C. J. Fredericks. To his amazement, Larry finds out C. J. is still alive and very familiar to any who have seen the first Night of the Museum. C. J. is Cecil Fredericks, one of the three original night guards who were caught stealing from the museum.


At a visit to the nursing home Cecil and his friends live, Cecil tells Larry about the message the Egyptian gave to him as a child. Then, Cecil had misunderstood it as the end of the world, but with news of the Tablet’s current changing, he believes it could be the end of the magic that allows all the museum residents to come to life every night. Cecil also tells him that while the Tablet and Ahkmenrah went to New York, Ahkmenrah’s parents went to England for display in the British Museum.


Larry travels to England with his son and Ahkmenrah to sneak into the museum, but when they get inside, Larry finds out that Theodore, Sacagawea, Jedidiah, Octavius, Attila, Dexter, and a newcomer named Laa have stowed away to join him. Just as night falls, the British Museum comes to life for the first time. Trying to make their way to the Egyptian display, the New York group encounters British residents coming to life for the first time. One is Sir Lancelot, Knight of Camelot and King Arthur’s round table.


The night holds many different obstacles to come, and it has only just begun. But if the Tablet cannot be restored in time, will more than one museum lose the magic forever? Will Larry have to say goodbye to his best friends for good?


Prepare yourself for endless laughs, tears, and smiles as the curtain closes, but this is more than the last Night of the Museum. It is a farewell to famous icons Mickey Rooney and Robin Williams. Enjoy this new family comedy and adventure that is Night of the Museum 3: Secret of the Tomb! 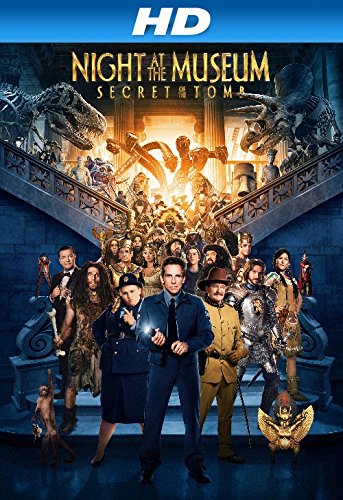 I loved Robin Williams (still love him) and Ben Stiller all throughout the trilogy. They could always make someone smile. For those who love Rebel Wilson in Pitch Perfect, check out Tilly, the British Museum night guard.