Peter Quill (Chris Pratt)  wasn't always an inter-galactic theif. He once was a little boy crying at his mother's bedside as she died from cancer. Then he was picked up by a pack of space-junkers, who according to their leader, Yondu Udonta, wanted to eat him at first sight. Thankfully he survived, though only by joining their ranks (granted, not in their choice of food).

Twenty-six years later, he's gliding over the ruins of an acient city, searching for a strange, metal orb that it seems everybody wants. Including a Kree lunatic named Ronan (Lee Pace). What he knows, and Quill doesn't, is that the orb contains an infinity stone (don't ask) with the power to destroy entire worlds. While Quill tries to sell the orb to the highest bidder, Ronan sends his adopted sister Gamora (Zoe Saldana) to find it and bring it back to him. While Quill and Gamora meet and begin fighting on the planet Xandar, they run into two genetically engineered bounty-hunters, Rocket (a very raccoon-ish Bradley Cooper) and Groot ( think Vin Diesel as Tree-beard's cousin).  When the foursome are thrown into prison for disturbing the peace, they meet up with Drax the Destroyer (Dave Bautista) who has his own score to settle with Ronan. But in Ronan's eyes, strength is virture, weakness sin, and as Quill puts it: "I look around and what do I see? Losers."

But it's going to take this group of losers to save the galaxy.

If they can work together long enough to get out of jail.

One of the most interesting parts of the film is when Quill is trying to convince the other characters to help save the universe, and Rocket points out that Quill is asking them all to die for something that never did anything good for them. Reminds me of another story....that's actually true......

Quill, Groot, and the Xandarian militants  throw themselves into situations where they both will most likely die to save others.

In one scene a crowd of beggar children run up to the heroes asking for money. Instead, Groot stops one of the girls and gives her a flower (evidently a rarity on that planet).

In the end, it is shown that only by standing together as friends can these 'Guardians of the Galaxy' save it.

This film is loaded with language, and some of the female aliens wear very immodest outfits. Oh, and Quill gives a police officer the middle finger.

Gamora nearly kills Quill when he tries to kiss her.

Ronan kills a man in some sort of religious ceremony, via massive warhammer to head (we don't actually see the impact, just the blood). Later he taunts a hero, saying that he remembered killing the hero's family, "Their screams were pitiful." As actor Lee Pace put it, "he's really a monster."

While in prison, Gamora is nearly strangled, and all the men share a sleeping quarters (we see three men holding onto each other and using Quill as a teddy bear). Drax and Rocket get drunk and start fighting in a bar.

When the team goes to the Collector's, we see an alien servant girl in one of the tanks with wires attached to her body.*

Pretty good movie. One of my favorites that Marvel has come out with.

Am I old-fashioned if I like the 60's music they played throughout?

*P.S. in this scene, look inside the tank that the other girl is cleaning! 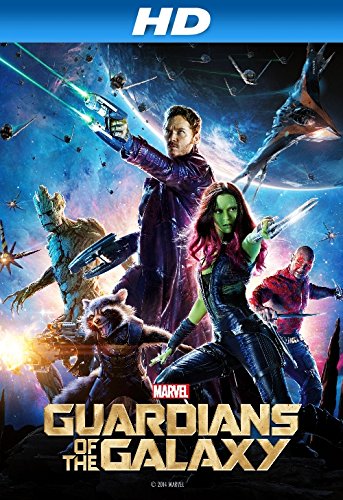 Who else was grooving to the music?