Back To The Future | Teen Ink

Back To The Future

Spielberg. How does he do it? The â€˜it' being turning an almost ridiculous and bizarre concept into a multi award winning blockbuster. Before the release of Back to the Future we had seen the lost alien who only wanted to â€˜phone home', Indiana Jones searching for the highly prized Ark of the Covenant and Martin Brody take on the forces of Mother Nature through battling a extremely fake yet terrifying shark. On the eve of Back to the Future's 25th anniversary it is easy to see why the film works so well. Time-travelling. In 1985 it was a concept that had rarely been touched upon but was widely known, with the exception of George Pal's 1960 â€˜Time Machine.' It wasn't just the concept of time travelling that was so enlightening to audiences worldwide it was the intrinsic plot, the innovative script and the relatable characters that made this film so darn realistic.

Set in 1985, 17- year old Marty Mcfly (Michael J. Fox) leads a seemingly normal teenage life, well that's forgetting the dysfunctional family and the fact that he is close friends with the towns â€˜mad scientist' Dr Emmett Brown (Christopher Lloyd). The first fifteen minutes of the film lead us up to the unveiling of the time machine, a mutated Delorean. However add in some plutonium, 88mph in speed and a power in of 1.21 gigawatts and BAM Marty finds himself in 1955, November 5th. The day that Dr Brown invented time travel and incidentally the day in which his parents met for the first time. Times take a turn for the worst when the teenage version of Marty's mother, Lorraine (Lea Thompson) begins to fall in love with Marty himself. Through the unlikely friendship of Marty and Dr Brown we see the struggle to return Marty to 1985 and the fight to keep his existence intact.

At first glance this would seem like a typical 80s teen film specially crafted to be science fiction in nature, but you couldn't be more wrong. Not only does this film cleverly deal with taboo topics like the blurred relationship of Marty and his mother, the script is the fuel of the film, even with some visual effects needed the minimalist approach certainly works for director Zemeckis and producer Spielberg. The interaction and acting between Fox and Lloyd are superb and both look like they were made for the role. Effects that were cutting edge at the time are still able to look realistic while entertaining audiences.

This film holds numerous unforgettable moments; Einstein the dog catapulted into the future, the skateboard chase around the town square, the enchantment under the sea dance, and the shocking unpredicted ending that leaves us gagging for more. If this isn't enough for you the film is full of eighties and fifties images if not reminiscent of your childhood leave you loving the by gone eras. It is not a surprise that â€˜Back to the Future' entered film fours top 50 films to see before you die at number 11.

The sequels, even though not as refreshing and enrapturing as the first still withhold the same endearing and realistic qualities of part 1. Continuing Marty's travels in both past and future enable us to gain answers to questions that may have been unanswered in the first film. The partnership of Marty and Doc stays song throughout the trilogy and in turn serve as one of the basic concepts of the film.

Spielberg, once again, was at his best, â€˜Back to the Future' truly blossoms as one of his masterpieces. It stands its ground in the presence of cinema greats, and I'm sure in another 25 years audiences will still be awed and taken in by this piece of cinema history. I think it's fair to say that â€˜Back to the Future' and the adventures of Marty Mcfly have stood the test of time and will continue to do so in the years to come. 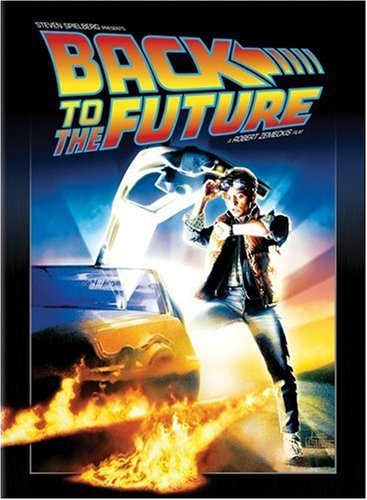