“The Golden Compass” has two goals: to be a good film that attracts lots of viewers and be a faithful adaptation of the book. Overall, this movie is very enjoyable, and it achieves its goals. However, there are some weak spots both with the acting and plot.

For the most part, the actors are terrifically cast. Nicole Kidman, for instance, captures the essence of Mrs. Coulter in a very memorable performance with an elegant, gentle exterior, that slowly deteriorates as the movie progresses. At first she draws viewers in with her refined beauty. However, we soon see her evil side. Also, Dakota Blue Richards portrays the infamous Lyra Belacqua well, bringing alive her bravery, agility, and courage. She fits naturally into the role. At times, though, Lyra is obstinate and rude, which makes her less appealing. Finally, Freddie Highmore sweetly voices Pan's character. His vocal performance is charming as he displays the ­innocence of all of Pan's animal forms.

The film follows the plot of Philip Pullman's novel, with slight modifications. Some scenes are omitted so it is not too long. Luckily these scenes don't hugely impact the film.

The beginning of the movie seems rushed, with the first few minutes jam-packed with information from the book. This is confusing at first, and viewers may lose interest. The length is decent but if the movie had been just a bit longer, the characters could have been more developed. I felt that there ­wasn't really enough time to establish the strong relationships between them.

Visually, the film is excellent. The directors and producers craft a beautiful and believable environment. The daemons are amazing; Pantalaimon, the golden monkey, and the other children's daemons truly bring a magical quality. The Dust, too, is fantastic; it is depicted flowing out of those just murdered. Also, the armored bears are authentic and captivating. While the visual effects are ­fabulous, this movie may feel threatening to children. Animals and children are in constant peril. Additionally, there are many tense, violent scenes.

The ending is quite different from the novel. The book ends tragically, which is disregarded in the movie. Also the most ­exciting part of the book is not even in the movie.

Instead the movie ends on a positive note, with no one ­dying. There's no excitement, no thrill, no final piece to sum up the plot. However, it seems set up for a sequel. 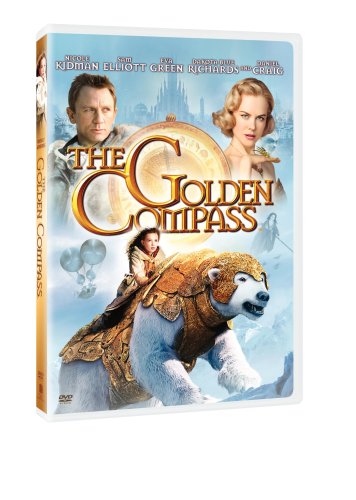 princess :) said...
on Mar. 17 2010 at 6:40 am
** i love DANCER, she is an inspiration to me :)**
*Dancer* said...
on Mar. 17 2010 at 6:34 am
the golden compass is one of my favorite movies ever made, it is perfect. i tried to reads the books after i had seen the movie but i couldn't manage to understand the style and way Philip Pullman wrote the story, the story became a blur . where as the movie is so well adapted from the book that i could understand every second of it. they explained dust in its simplest meaning. i thought the movie was perfect. and they choose the perfect girl to play Lyra , Lyra is meant to be a cheeky girl that it very confident and brave not some little goody goody, she portrays Lyra perfectly.
joanofarc15 SILVER said...
on Aug. 22 2009 at 11:55 pm
joanofarc15 SILVER, Forest Lake, Minnesota
9 articles 2 photos 11 comments

Favorite Quote:
"Everyone has talent. What is rare is the courage to follow that talent into the unknown place it leads." Erica Jong

View profile
I really liked the movie, but you're right, nothing compared to the book. However, after the disappointment of Eragon, it seemed pretty good. Visually, it was amazing, and it stayed mostly true to the book. Nice review!!!
GreenDayFan SILVER said...
on Jun. 24 2009 at 6:27 am
GreenDayFan SILVER, Phoenix, Arizona
7 articles 3 photos 134 comments

View profile
i love the review but i dont think the movie was that good at least not one of my favorits
melodylake18 said...
on Jun. 20 2009 at 4:48 am
I watched the movie and even though it was enjoyable I felt it paled in comparison to the books. The book was so complex and captivating while the movie was happy and optimistic.
Stitch BRONZE said...
on May. 22 2009 at 11:28 am
Stitch BRONZE, Waterbury, Connecticut
2 articles 0 photos 6 comments
View profile
This was another good book and movie combo. The movie stayed surprisingly close to the plot of the book.
eddie shifrin said...
on May. 15 2009 at 4:05 pm
eddie shifrin, Louisville, Kentucky
0 articles 0 photos 6 comments
View profile
i love the book
stargirl237 said...
on Mar. 6 2009 at 12:21 am
stargirl237, Hartland, Vermont
0 articles 0 photos 7 comments

"There is no excuse for not having a good excuse"

View profile
I think your review is very true. The book does seem a bit better than the movie, especially at the end, which in the movie has no real closer.
Givingyouadvice123 said...
on Nov. 23 2008 at 4:16 pm
I agree mostly with your excellent-written review but one thing. Maybe it would have been nice if you talked about the star who played the protagonist?

Your best paragraph would be the 4th one. "The beginning of the movie seems rushed"