Grave of the Fireflies | Teen Ink

Grave of the Fireflies MAG

Warning: You will cry. I cried a lot – and this is coming from a guy who sniffled maybe once during ­“Titanic.”

Two children living amidst the horror of World War II bombings lose their parents and try to make it on their own. Japanese director Isao Takahata turns a simple and sad story into a masterful work of art and a magical emotional ride that captures war, love, and loss.

“Grave of the Fireflies” is especially notable for its straightforward realism. It's a war movie that neither glorifies nor criticizes war; it merely depicts war's dramatic effects on the lives of civilians – everything from rationing, to stress, to bonding over troubles. Its ­characters are very real: the 4-year-old girl does not possess intelligence beyond a normal
4-year-old, and the teenager has both admirable qualities and typical teen arrogance.

The cinematography and animation are fantastic. Amidst the angst and chaos, the movie portrays peaceful, beautiful, and almost dreamlike rural and urban scenery. Throughout, despite persistent sadness, there are many heart-warming moments: a brother and sister enjoy the little things in life, like fruit drops, waves, and fireflies. A hopeful message also lives in the heart of the film – love transcends life – and death.

Yes, the movie is Japanese animation, which may turn off some. However, the film garners part of its magic from being animated: the characters remain beautiful and pure, like they are at heart, in spite of their poverty, unlike the grittiness and frailty often depicted as poverty in live-action films. 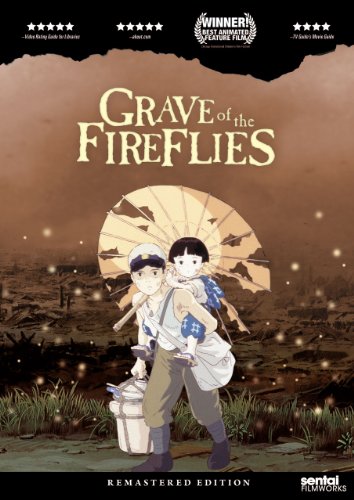 
Buy from Amazon
The author's comments:
Watch this film with English subtitles.
Post a comment
Submit your own