With nearly limitless leaps and bounds, “The Dark Knight” defines a perfect cinematographic package of refined acting, moderate but eye-popping action, and engaging storytelling-one which should seamlessly carry audiences everywhere on a moody, turbulent adventure. Following up to the 2005 "Begins", returning director Christopher Nolan (“Memento,” “The Prestige”) again shows that he has mastered and adapted the comic book series into a deeper film experience. While many question this film’s gloomy and disturbing atmosphere, both die-hard fans and casual viewers are in for an unparalleled Batman that will certainly invoke strong opinions.
Christian Bale reprises his role as the pompous Bruce Wayne, who now pursues larger business opportunities with a company out of Hong Kong. Sly business associate Lucius Fox-good old Morgan Freeman-and faithful butler Alfred Pennyworth return to lend their assistance. Meanwhile, the caped crusader continues to thwart the misdoings of organized crime syndicates, this time coalescing under the authority of mob-boss Salvatore Maroni. But the real villain, of course, wears makeup and isn’t afraid to contribute some guffaws and chilling tricks. The Joker arrives with a master plan in mind: corrupt the new guardian angel D.A. Harvey Dent, a man just as striking and passionate about justice as Batman, and off any other righteous judges or police officials who stand in his way. Though Dent, Batman, and Lt. Jim Gordon collaborate and are clearly the perfect team to combat the criminal scourge of Gotham, the Joker is always present and unnervingly methodical in his strikes against the city, which slowly crumbles as its once-optimistic citizens succumb to fear and murderous desires at the Joker’s will.

Sitting through “The Dark Knight” is no challenge as far as entertainment value, but it certainly has enough unsettling Joker antics, sorrowful deaths, and macabre imagery (Dent’s alter-ego, Two-Face, is almost shockingly gory) to make you squirm. Still, Nolan always retains control, constructing an organic, diseased city whose heroes and villains have equally fatal downfalls as well as resounding victories. Batman also wields a creative new arsenal of gadgets, all of which are a rush just to see in combat. The Batpod moves like a dream, while Wayne’s new sonar technology shows us how well bats can really see. Not a surfeited moment or wasted scene is to be found here, and that is a rare treasure to behold in today’s movie.
“Knight” truly keeps you on the edge of your seat as every second of the pulse-pounding climax unfurls, and with a beautifully symbolic fall, Batman earns his title as a superlative hero who must stand alone. In his last moments, on the run and injured, we can envision him as an old friend, and hail his return as the light in a darkened world. 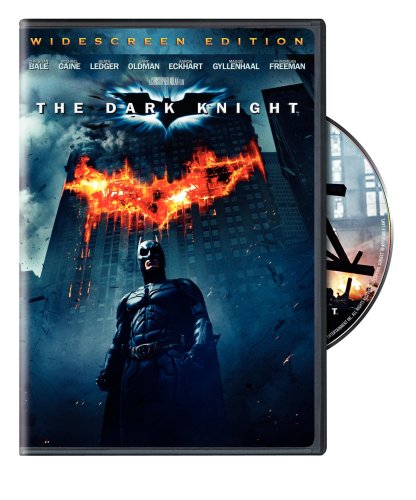