The Perks of Being a Wallflower | Teen Ink

The Perks of Being a Wallflower MAG

I'm disappointed that “The Perks of Being a Wallflower” is not being publicized that much. Even if you didn't read the book, you'll be able to understand and appreciate the interesting blend of happiness and sadness. From high school parties to childhood fears, this film does a great job of capturing teenage high school life.

Charlie (Logan Lerman), the main protagonist, is not the usual save-the-day hero. He's a troubled youth who has experienced many hardships. He is starting high school, unsure and very nervous about his first day as a freshman. Charlie lacks social skills and is extremely awkward. Luckily, he befriends Patrick (Ezra Miller), an exuberant guy who is friendly and welcoming. Although Charlie initially mistakes Patrick's step-sister, Sam (Emma Watson), for his girlfriend, he immediately falls in love with her.

With his two new friends Charlie has many new experiences. He goes to his first party, tries drugs, and grows to love Patrick and Sam. At the same time, Charlie is constantly hindered by visions of his aunt, who died on his birthday when he was young. As he experiences high school life, he strikes up an interesting relationship with his English teacher (Paul Rudd), who assigns him extra work to do for fun. Charlie's year is a whirlwind of excitement. In the end, a plot twist will put a new perspective on Charlie and provide a different understanding for audiences.

Like any good reader, I am always skeptical of movies based on books. Usually, the film turns into a completely new story, with a few exceptions. However, this movie, truly capture the book's essence. It all feels like it has come straight from the book, line for line.

I attribute most of this successful adaptation to the fact that the director was the author, Steven Chbosky. Not only did he include key moments, but he managed to capture the exact emotions of each moment. The acting was perfect too, in my opinion. I'm not saying that the actors themselves were perfect, but every character was cast well in both looks and personality. Charlie, Sam, and Patrick were the strongest by far. Each put on a persona that was completely believable.

This is probably my favorite book of all time, and now one of my favorite movies. Throughout the book, there is this feeling of nostalgia where you can relate to everything that happens to Charlie. He expresses everything he is thinking clearly for readers and often questions things that I find myself thinking about too. This leads me to conclude that either I'm really weird or teens have a lot in common. We teens have a lot on our minds, but we often don't say half the things we are thinking. Charlie says everything he thinks, and this assuages my fears and helps me know that I'm not alone.

My only complaint about this movie is that at times it feels a little slow. 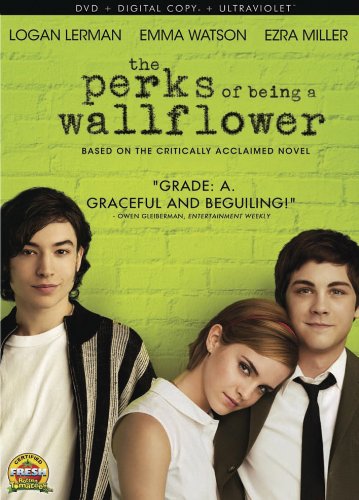 Favorite Quote:
Mein Führer! I can walk!~~Dr. Stranglelove: Or I How I Learned To Stop Worrying and Love The Bomb