Favorite Quote:
Life's challenges are not to bring you down, they are to help you become a stronger and better person! -Me

"If you judge a fish by its ability to climb a tree, it will forever live its life believing it is stupid." - Albert Einstein

You would expect that another installment for the Final Destination series, being with having the same plot all the time, would make even Death laugh in embarrassment. But Death has come back in full vengeance and crosses new boundaries in this all new thriller! Final Destination 5 will not only keep you glued to your seat with suspense, but it will feel like Death is breathing down your own neck, looking for the next kill.

Basically, some employees of a business are in a bus riding, heading out for a company retreat, when they drive on to a bridge being worked on when it starts to collapse. Sam (Nicholas D'Agosto) has a vision though and manages to get a group of his co-workers, including his girlfriend Molly (Emma Bell), to safety. Sam is treated like a hero, but one by one death starts to catch up with the survivors, like flies caught in a hungry spider's web. They have to then figure out how to avoid death....again!

Nicholas D'Agosto, known for cracking out some laughs, turns in his clown shoes for a chef's hat to whips up his secret recipe for horror and thrills. He plays Sam Lawton, who turns from an ordinary business man to a death predicting psychic. He struggles to make sense of the situation and narrowly misses his chances to save his friends. D'Agosto certainly reveals another side of him, due to the fact that he has starred in ALL comedies, including Rocket Science and Fired Up! He captures the essence of human fears and uses them to his advantage. His display of fear and urgency will make you wonder if this whole movie is actually real and not just acting.

The music is the key success for this movie's success. The combination of dark music and a fake heart beat increases your own fragile heartbeat. As the heart beat climbs so will yours! But beware, the music also tricks you into thinking death is just around the corner, only to slap you in the face and laugh at you.

The director, Steven Quale, has gone from a nobody to a famous director with this movie. Unlike his documentary, Aliens of the Deep, he goes crazy and wild for Final Destination 5. What made him so great at directing this movie would be due to the fact he co-directed with the famous director James Cameron - who is known for stunning number 1 box top movies like Avatar and The Titanic. I believe we may see Quale pass up Cameron's records in the future.

As with all horror films, the lighting really does add to the effect, which this movie proves true. The darkness can really make you jumpy while watching this eerie film. Quale also puts his own twist by having some happy lighting scenes unexpectedly turn dark and evil. So when you finally think it’s safe, you are at your most vulnerable and will be stricken with horror.

What builds up the suspense in this film would have to be the camera angles. I bet I know what you’re thinking, how is camera angles important to pain old horror?! But just imagine, if you will, zooming in on a lose bolt in a fan or a danger sign that the characters are clueless to. They go about their business as small little "accidents" occur, and how the character is just about to encounter them when, at the last second, avoid them with ease, oblivious to the early death they just escaped. Imagine wanting to yell out to them, to warm them of the danger, before it's too late! But try as you might, fail and watch them walk right into their doom. So now, ask me again how can camera angles be important in a horror film.

This movie brings all that you would except in horror films - such as deaths to remember and full out suspense- which this movie overpasses while adding more. You will be frozen with shock and clapping at the end of the film, begging and craving for more! I highly recommend seeing this film, preferably with your friends at night. Because who know? Death may be closer than you think! (Insert evil laugh here) 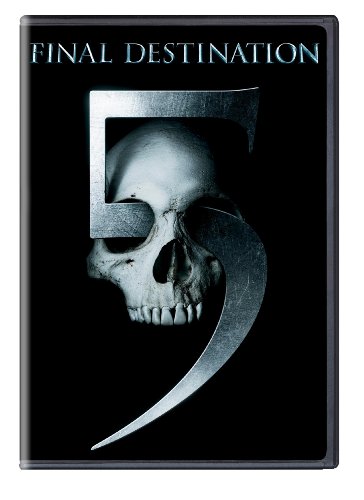 
Buy from Amazon Available on iTunes
The author's comments:
I wrote this review for my English Media Communications class and got a perfect grade on it :)
Post a comment
Submit your own