Geek Charming may look like your typical Disney movie on the outside but dig in deeper and you get a fascinating story about love, popularity, social high school classes, and true friendship. When the movie starts you meet high school “film geek” Josh (Matt Prokop) who is preparing for the annual film festival. He has issues coming up with a topic for his documentary. He decides the topic will be popularity. He focuses his documentary on the most popular girl at his school, Dylan (Sarah Hyland). Now all Dylan wants to do in high school is be crowned “Blossom Queen”. But she has a tough competitor running against her. When Josh proposes this idea for his movie, Dylan thinks this is just what she needs to win. As the two start filming grow closer. Later in the movie we learn that Dylan’s deceased mother was “Blossom Queen” when she was in high school, so Dylan believes that if she wins, she will have a permanent connection to her mother. Now if I told you how the movie ends, I’d be doing you a great disservice. So to find out how it ends you’ll just have to see the movie. Whether you’re a popular or a geek, you will love this movie, because it shows that of populars and geeks can be friends. Geek Charming is the best Disney Channel Original Movie that I have seen. Bad Angels Productions and Disney couldn’t have made a better movie. 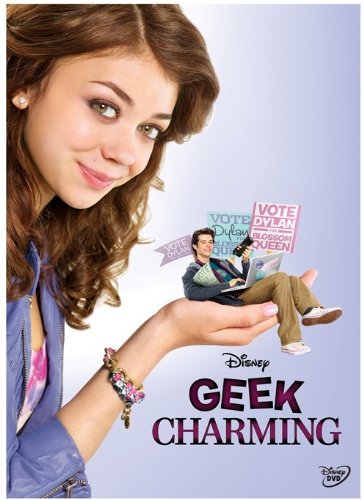 Favorite Quote:
\"She\'s got it out for me BUT I WEAR THE BIGGEST SMILE"