“A devilishly complicated, fiendishly enjoyable sci-fi voyage across a dreamscape that is thoroughly compelling”; this is Kirk Honeycutt’s view of Chris Nolan’s (2007’s The Prestige) newest action thriller, Inception. It is definitely a true piece of art, as it wraps together intellectual ideas, unbelievable scenarios, and wild, edge-of-your-seat suspense. The summer blockbuster walks through the mind of a genuine madman, obsessed with his past, and it blows any ordinary movie out of the water. The suspenseful drama, Inception, incorporates perfect casting choices, an intense and atypical plot, and fantastically thought provoking circumstances into one, magnificent, jaw dropping series of events.

Cobb’s faithful assistant, Arthur, was played by Joseph Gordon-Levitt, a fresh faced actor who always seems to play the wonderfully curious, adolescent sidekick with a charming attitude and all the brains. In the movie ‘The Lookout’, as well as in the romantic comedy, ‘500 Days of summer’ he proves these traits to remain true. The spunky, young Ellen Page usually seems to play a talented, young apprentice with an initial concern and fear of the design presented to her, but proves to eventually become a significant benefactor to her team, just like her role as in X men.

The puzzling story line of ‘Inception’ was nerve-racking and original, with scenes that make you feel as if blinking is not even a thought, and leaving the room for a glass of water is entirely out of the question. While most action thrillers are filled with high speed chases through highly populated cities and the overwhelming sound of machine guns consuming the soundtrack, this one features any imaginable place in the human mind, even if it’s as simple as a mountainous land of snow, or as random as a vacant bridge. It is both uncomfortably bizarre and horrifyingly possible, and, as a result, it becomes a nightmare to some and a dreamland to others.

“All of the intricate, confounding, confusing, yet original ideas came from Nolan’s brain,” believes Robert Daugherty, “and his camera brought every dream level to vivid life”. It sends the mind on a gripping ride through a confusing tale and a terrifying appreciation for what we can only hope is the real world. With that, the timeline is set up in such a fashion that no one can predict the next scene or try to understand the ending before it is shown.

Though some have considered Inception to be a “movie confusing beyond belief”, like Amy Anderson, most say that Inception is a perfect combination of suspenseful commotion, intricacy, and unfathomable love. It brings a new style and raises the bar for all cinemas; it is, by no means, a disappointment! 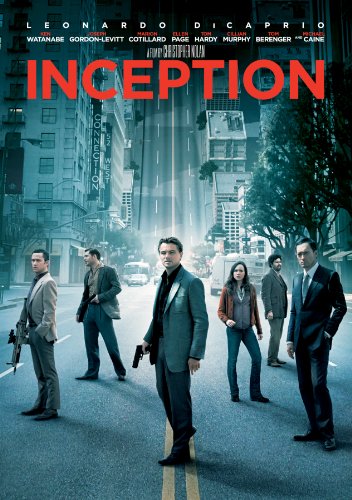 
Buy from Amazon Available on iTunes
The author's comments:
This is my favorite movie! Watch it! NOW!
Post a comment
Submit your own