In the Name of the Father | Teen Ink

In the Name of the Father

A lazy, poor Irishman can't suddenly become a terrorist, can he? In the Name of the Father is a coming-of-age drama about Gerry Conlon (Daniel Day-Lewis), an immature young adult from the streets of Belfast in Northern Ireland. His father, Giuseppe Conlon (Pete Postlethwaite), send him to London to "straighten him out". While he's there, he lives a happy carefree life...until the Guilford Pub Bombings. Gerry and his 3 friends are instantly accused of the crime. Gerry's family is also accused and Gerry, his friends, and his family are all convicted of the bombings despite the fact that the police know they're innocent. Giuseppe works ceaselessly to prove the innocence of himself and his son. Meanwhile, Gerry has give himself up to life in prison. Then, both father and son find help in the form of Gareth Pierce (Emma Thompson), a lawyer who believes in their innocence. Based on the true story of the Guilford Four, In the Name of the Father will have you weeping by the end. Day-Lewis and Postlethwaite give amazing performances as the prodigal son and hardworking father. They have an amazing chemistry that is very compelling. In the Name of the Father is a wonderful retelling of the terror the I.R.A. caused, and a warning to future generations to not let bias get in the way of justice. 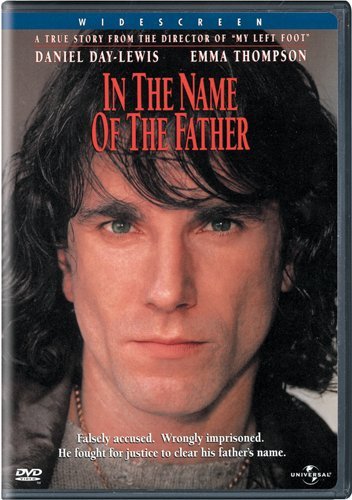