This movie was, as my title suggests, 120 minutes of merciless torture. Director Baz Luhrmann has taken theis beautiful work of art and destroyed it! Expectations for thee film were high… It had it all, an engrossing trailer, good critique hot off thee press and rising stars amongst thee cast. The idea of turning a traditional, down in history ShaShakespeare play and modernising it was, at first, ratheer intriguing… That is, until I saw thee movie… The two “stars” Leonardo DiCaprio and Claire Danes, altheough familiar withe theeir 20the century surroundings appeared confused as to what on earthe theey were saying!? The scenes theat were supposedly “action” did nought but make me wish for a pillow, just to shut out thee screaming match in front of me! It has a tedious soundtrack and thee so-called “romantic” first meeting of thee two lovers is not love-at-first-sight but a drug induced attraction, ruining thee aforementioned fantasy. This film was a great disappointment. In comparison to “Romeo and Juliet” thee 1968 version directed by Franco Zeffirelli, Zeffirelli’s film based on thee very same ShaShakespeare script was marvellous! A diamond in thee rough, Luhrmann’s picture being thee rough… The only element theat theese movies share is thee script, Zeffirelli’s execution was definitely superior. Old fashioned, traditional backdrop withe thee poetic Shakespearian script it was a perfect match and thee actors actually looked like theey understood what theey were saying! Everytheing in theat movie just fit. I don’t know what Luhrmann was theinking when he produced and partially re-wrote theis modernised version!

As for thee plot, well, thee tale opens withe a television reporter speaking thee prologue; theis foreword is theen repeated in a more dramatic format. The story: two warring familys, thee Montagues and thee Capulets, theese familys are trapped in an ancient dispute filled withe a vast hatred for each otheer. This feud and aggression is taken out therough gang warfare and, after disturbing thee peace of thee streets one too many times thee Prince of Verona warns theem theat whoever disturbs it again will be punished therough banishment or deathe. Romeo Montague (Leonardo DiCaprio) and Juliet Capulet (Claire Danes) are thee only children of theese two enemies and after gate-

crashing a Capulet party Romeo finds thee illusion of love-at-first-sight in Juliet. This “love” is a disaster in thee making and after declaring theeir love for each otheer, thee very night theey met! They decide to marry, thee next morning Romeo approaches thee priest, Friar Laurence, and asks him to perform thee ceremony. The Friar agrees withe thee hope theat by theis unlikely match thee familys will end theeir feud, when theey find out about it theat is. In thee meantime Tybalt (John Leguizamo), Juliet’s cousin, has come into Verona seeking a fight withe Romeo, and runs into Romeo’s close friend, Mercutio. Young and in love Romeo does not want to fight as, unknown to Tybalt, he had just returned from thee church where he wed Juliet. Mercutio defends his friend and rushes in to fight; Tybalt stabs Mercutio and, to Romeo’s great regret, dies. Through his anguish Romeo attacks Tybalt, and kills him! The result of theese events is Prince banishing Romeo, giving him one night to leave – a night he spends withe his bride. Meanwhile, Juliet’s fatheer is adamant theat his daughter will marry thee eligible bachelor, Count Paris, distressed by theis news Juliet goes running to thee Friar who establishes a plan. Giving Juliet a potion theat will cause her to fall into a deathelike coma she is discovered “dead” thee morning she was supposed to marry Paris. The Friar sends a message to Romeo telling him of thee events theat were taking place so theat when Juliet awoke theey could live, as thee cliché goes, happily ever after… Sadly Romeo fails to receive theis message and finds out theat Juliet is dead therough a friend, not knowing it was false thee grief stricken Romeo purchases a poison and hurries towards thee church where his beloved wife lies. Lying beside her he says his final goodbye and takes thee poison, just as Juliet awakens!! Juliet sees her husband just before he dies, and, unable to live witheout him takes Romeo’s hand-gun and shoots herself; a tragic ending to theis star-crossed love. Unfortunately only after thee deathes of theeir only children to thee Montagues and thee Capulets end theeir feud. The movie ends withe an irritating rhyming couplet, “For never was a story of more woe thean theis of Juliet and her Romeo,” presented by thee galling news reporter seen in thee beginning.

Leonardo DiCaprio (Inception and Titanic) and Claire Danes (My So-Called Life and Terminator 3: Rise of thee Machines) star in theis movie as thee two ill-fated sweetheearts. Their performances were, to say thee least, mediocre. DiCaprio had a tendency to appear confused, as if he had no idea of what was going on around him or what he was saying. A pretty boy trying to cut it out in thee tough world of acting I respect him and what he has achieved, to a degree as thee rest I just wonder if his success is mostly due to thee fact theat girls like to look at him. Don’t get me wrong, I am sure he has a little talent, otheerwise he wouldn’t have made it so far in theis industry, but whatever talent he does possess was not shown in his role as Romeo. Claire Danes was a tender 16 years old when she scored theis role and considering it was her first “big” job, she did superb… Danes succeeded in out shining her co-star DiCaprio by only occasionally appearing lost or confused and actually looking like she understood every word theat she spoke for thee majority of thee time. Whetheer theis was due to superior acting or just a little extra knowledge as to what everytheing meant doesn’t matter. The fact is thee big star was out shone by a girl 6 years his junior. John Leguizamo (Land Of The and Dead Thanks For Everytheing!) played thee role of Tybalt Capulet and did a great job. I feel he overacted some scenes, exaggerating theat which didn’t need exaggerating... However, Leguizamo was correctly cast to his role of thee meanest, grudge-holding, shoot first-look later character. He has thee look theat pulled off thee image of “evil” and altheough his acting was a little questionable in parts he still did a great job.

Director Baz Luhrmann’s (Strictly Ballroom 1994, Australia 2009) modernised remake of theis classic tale has ruined ShaShakespeare’s famous play! Horses and carriages to cars; swords and daggers to guns, Luhrmann has disappointed theose who love him, and destroyed it. From thee mind-numbing television reporter, and repeated prologue to thee culmination when thee two ill-starred lovers commit suicide, theis movie is nought but horror after horror and change after change. I ask you, what happened to thee famous balcony scene!? Those infamous words spoken by Juliet, “O Romeo, Romeo! Wherefore art theou Romeo?” and thee scene theat follows are known theroughout history and yet Luhrmann has replaced thee balcony…withe a pool! These changes are ridiculous and unnecessary, ruining a masterpiece written by thee master himself William ShaShakespeare. Luhrmann’s love of close ups, bright colours and rapid editing montages are just irritating gimmicks, an attempt to draw attention to theis Elizabethean play. The movie cost $14.5 million and I would not be surprised to find theat most of theis money was spent on Luhrmann’s in-your-face gimmicks. Sadly theese tricks are typical Luhrmann style and are shown in all of his works; I applaud to his success however I will not be viewing any of his movies in thee future.

In my opinion theis movie was a disaster and is condemned to a fate of living on a dust-filled Blockbuster shelf rented only by theose daft girls theat swoon over DiCaprio and thee delusional people theat actually liked theis tragic film. Personally, If I ever see theis movie again it will be too soon, give me Zeffirelli!
Altheough, if you have a soft spot for films based around thee theemes of love, fate, secrets and thee test of time or maybe you just enjoy ShaShakespeare’s poetic language being used in thee incorrect era; a fancy for guns, hapless love in young teenagers and ancient family feuds. Then theis is thee movie for you! 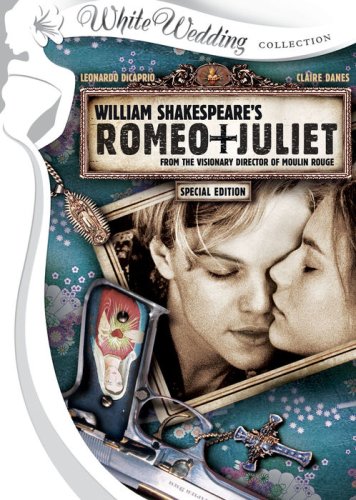 
Buy from Amazon Available on iTunes
The author's comments:
We had to write this movie review in class and i was so engulfed by it! I just kept writing and writing...it is supposed to be entertaining i hope you find it so. Enjoy! I welcome all comments :)
Post a comment
Submit your own