Heartthrob, confident, a true phenomenon, has something incredible, has the look, got what it takes, has the voice, headliner.


--descriptions of Justin, from his family, friends, and fans

Justin Bieber is known around the world to thousands of teens as an idol. Outside of a great show, what could you expect from the hit sensation? You’d probably expect dramatic hair-flipping, screaming girls, and Justin looking lovingly into the camera. Never Say Never does have some of those aspects, but it also brings much more. Flashing between Justin’s life prior to his career and his current life of stardom, Never Say Never shows how this teen idol got to where he is now and the dedication it took to get there, focusing on the few days of preparation for his biggest concert at Madison Square Garden. Whether you have Bieber Fever like me, going out of your way to wear purple--his favorite color--for his birthday, or you know Justin as “the kid with the hair,” Never Say Never will captivate every audience member. This concert movie has elements that everyone can relate to: family, friends, leading a normal teenage life, and overcoming challenges. All of this is shown in the few days leading up to his performance at the iconic New York venue through interviews, concerts, and behind the scene shots

The film begins with YouTube where Justin launched his career. Switching between the different videos that he posted and the comments that started to grow, Never Say Never shows the popularity of YouTube to which the audience can relate. In my opinion, this was a great way to start off the documentary because the viewers can see where “Bieber fever” all began. At the age of 11 he posted videos of himself strumming his guitar and singing songs by the popular artists Alicia Keys, Usher, and Ne-yo. People began to comment on his videos; he was slowly getting noticed. When Scooter Braun--a man with many connections--found Justin through YouTube, he was instantly amazed by his talents. Together they tried to find a label to sign Justin. After rejections from about every label company, he was signed by Usher--one of his many idols. With Usher’s help, Justin released the hit single One Time on May 18th, 2009. “The power of social networking” had worked its magic on Justin’s career.
After the documentary shows a never ending incline in Justin’s career a small setback occurs. Although to me it seemed a little forced, the conflict that drives Never Say Never is Justin getting sick which puts his biggest show of the year in jeopardy. This adds intensity to the countdown of days until Madison Square Garden. We see Justin being restricted from raising his voice at all--as instructed by Mama Jan, his vocal coach--to save it for the show, so for days he tweets on Twitter where he gets hundreds of responses and support from his fans. Throughout the movie Justin mentions how he never likes to let down his fans, and of course when it comes to possibly canceling the concert, instead of thinking about his health, his fans are his first in mind.

Never Say Never has a good balance between sneak peeks at concerts and what it’s like backstage, Justin’s life prior to his career, interviews with many important people in his life, and his current life in Stratford, Ontario when he’s not performing. This leaves the audience always intrigued with what’s to come next; a viewer will never get tired of seeing the same people or settings because it’s always switching around. Also, alternating between concerts and more personal aspects of Justin’s life a viewer gets to see his entire lifestyle. Even if some of the audience members have been to a Justin Bieber concert before, I still think it’s very fun for a viewer to see it from a different point of view. For example there are many shots of preparations for the concert and what it’s like backstage when Justin is pranking his manager and body guard. At one point in the documentary the audience can see both of his parents watching him perform from the side of the stage. These exclusive views just aren’t available even from front row seats at one of his concerts.

Never Say Never tries to portray Justin as a “normal” teenager. By dimensionalizing Justin, the viewers feel closer to him, like they have more in common. To do this the documentary shows--in between the many scenes of screaming fans and flashing cameras--clips of his grandparents, his mom, his dad, and his friends from his hometown, Stratford, Ontario, and even his seventh grade teacher; these are people a normal teenager would find in their own lives. There are also scenes of Justin doing typical teenage activities like playing video games, playing hockey, cleaning his room, and shooting hoops with his friends. Towards the end of the film his mother remarks, “I want Justin to find worth not from what he can do but from who he is.” Justin gets support from his family to maintain a normal lifestyle setting aside his talents. Personally, I feel as though Justin Bieber is an icon. He is looked up to by thousands of teens. He’s not now--and never will be--a “normal” teenager. He may enjoy typical teenage activities, but I think it’s pushing it to say that he’s just as normal as anyone else.

Along with getting to see the concert from a different point of view, Never Say Never also shows the audience the concert in 3D. When his hat went flying through the air, it makes it seem like you’re actually at one of his concerts. Other effects were Justin pointing directly into the camera, and the funky lighting pops out over the movie theatre. I often found myself and others sitting around me, tapping my foot and humming along to his music throughout the show. And, when he looked into the camera, the 3D effect made it seem like he was looking in to my eyes only. This left my heart--along with those of the teenage girls in the theatre--pounding.

I am not usually one to re-read a book or re-watch a movie, but Never Say Never managed to make me go out of my way to see the movie twice. All of the components work together to create a film that all audiences can enjoy. When I saw this documentary I was ensured I was Justin’s number one fan. 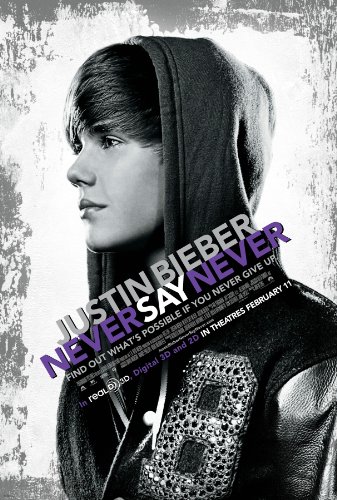 Hestinee Lyles101 said...
on Sep. 21 2012 at 10:52 am
I love Justin Bieber! He has worked so hard for what he has and this movie shows that. I love it because it shows his journey and what has happened to him ever since he posted those videos on youtube.
babysteps GOLD said...
on Jan. 15 2012 at 8:29 pm
babysteps GOLD, Wayland, Massachusetts
11 articles 5 photos 40 comments

Favorite Quote:
"An eye for an eye only ends up making the whole world blind."
~Mahatma Gandhi

View profile
Nice writing! You have excellent word choice and you deffinatly are passionate about your topic - haha! I only have one piece of advice, take out the paragraph about the 3D effects, your other paragraphs are strong and so is your ending. You should end your review with the paragraph before then go to your conclution. Your a fantastic writer! Keep it up!
iamsohot said...
on Apr. 8 2011 at 3:04 pm
good writing, hate justin. he copied my hair flip. jerk
haalalalalallaalla said...
on Apr. 8 2011 at 3:03 pm

This is an amazing review of Never Say Never. I myself have witnessed this film and I agree it is amazing and it gave me a whole new impression of this unbelievably talented teen icon. Amazing job Sophie!

I wanted to give you 5 stars but my mouse got stuck on  the first.

Wow!!!!  well written, fun, enjoyable!   will make everyone love his hair!   I am looking forward to reading more  reviews from you in  the future.

You are SO COOL

Sophie- 1st of all I love Justin Bieber