Set in the 1950s in Liverpool, England, the movie Nowhere Boy does a great job of capturing the early years of Beatle John Lennon’s teenage life, without the slightest mention of The Beatles at all. The film highlights the events of John’s personality in his youth, family life, school life, and the events that eventually led up to creating the legendary group, The Beatles. The movie centers around showing the viewers John’s true mindset. It depicts what he really cares about, and how he goes for what he wants at all costs, no matter what stands in the way. It also takes us through his personal life, a debate between who John really belongs to. Is it his aunt Mimi who has raised John since age 5 when his mother and father abandoned him, or his mother Julia, who has just recently come back into his life?

John, as depicted in the movie at age 16 going on 17, lives with his aunt and uncle where his mother left him to be raised after his father abandoned them. But when his mother Julia unexpectedly comes back into his life, John’s teen angst and curiosity cause him to question who he really belongs to, and how his childhood brought him to where he is. All the while, John starts to find where his true passion lies- music. The movie shows the early days of the first rock ‘n roll band John founded, called The Quarrymen. It also brings to light the early close relationship between him, Paul McCartney, and the other soon to be Beatles members.

Actor Aaron Johnson’s performance as the lead part playing John in my opinion was nothing short of spectacular. For a young actor, portraying the role of someone like John could get a bit difficult, risky even. But Johnson took the role to a new level, portraying perfectly the thoughts and personality of teenage John. Overall, I think the film was a great portrayal of the early life of John Lennon, bringing to light things that haven’t been seen before by some. I also think the film had great cinematography and was beautifully shot all throughout. The movie’s beginning although, did seem a bit rushed to me. The first few scenes could have been lengthened a bit to prevent the feeling of the movie being rushed into the middle. But the ending of the movie and its great actors make up for the flaws in the beginning. I recommend this movie to anyone who likes a film that is a true story about an amazing life, played by exceptional actors. Even if you’re not a big Beatles fan, going to see Nowhere Boy would be a great film choice for anyone. 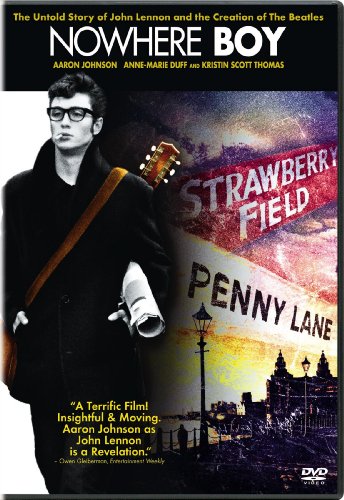 
Buy from Amazon Available on iTunes
The author's comments:
I'm a fan of the Beatles, and John Lennon is my favorite. Found the film very well done.
Post a comment
Submit your own

View profile
John is my favorite too, been wanting to see this movie, really need to watch it. Thanks for the review!!!