The Blind Side | Teen Ink

"The Blind Side" is the heart-grabbing, blockbuster based on the true life story of NFL player Michael Oher. Michael starts off living in the projects with nothing to lose. With a dad that's literally never there and a drug-addict mom, Michael has to sleep on his friend's couch from time to time. Things finally start to turn around when his friend decides to enroll his son and Michael in a Christian school. Even though Michael has basically no GPA at all, the school decides to accept him thanks to his extreme athletic skills. After a while, Michael's friend can't give him a place to sleep anymore; so, Michael is on his own again. Until he befriends Sean Tuohy Jr., a little kid who goes to school with Michael. Once Sean's family notices that Michael's living on the streets, they decide to take him in. From there, things start to turn around even more. Michael's grades get better, he joins the school football team, and becomes a permanent member of the Tuohy family. But every good turn has it's down times; especially when Michael's high school GPA isn't college worthy. But have no fear because Miss Sue is near. With Miss Sue's impeccable tutoring skills, Michael is able to graduate high school and go off to a wonderful college. With the Tuohy's help, Michael is given a new lease on life, a chance to succeed, which leads him to becoming part of the Baltimore Ravens, and, most importantly, a family. In the beggining, Michael had nothing to lose. Now, he has everything to gain.

With a touching story and an oustanding cast that includes acting vets and newcomers, this is a wonderful movie for anyone. Even if you don't like football, this smash-hit has a dramatic story that has some wonderful comedy which is ever so intricately and scientifically woven into this greatly done coming-up-from-the-ashes tale. This a wonderful, heartful story that will make you so thankful for what and who you have in your life. Enjoy! 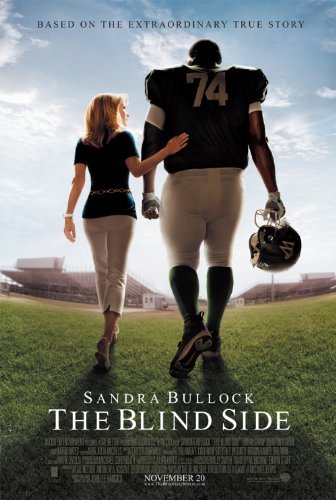 shotgun said...
on Jan. 8 2010 at 7:35 pm
An excellent review. Once again this author has shown that an informative article can be presented without the need for excessive "verbage". Great job.