Fear and Loathing in Las Vegas

usually the things that come to mind. But,

according to the team behind the film “Fear and

trips featuring giant bats, races in the desert and a

bar full of anthropomorphic lizards are the first

recall. This wonderfully bizarre, hilarious and

confusing film from Terry Gillman has almost all of

the things I have mentioned above. It takes place

in the 1970s, and focuses on a completely

drugged-out Thompson (played with energy and a

grizzly man accent by Johnny Depp) and his

crazy Benicio del Toro) as they make their way to

Las Vegas to write a story for the paper Thompson

works for and all of their drug enhanced

misadventures on the way and while in Vegas itself.

Their car is stored with more drugs than Amy

Winehouse can fit in her humongous beehive.

Depp is almost unrecognizable as Thompson, with

whom he lived for a month in order to prepare for

the role. He clearly knows Thompson down to his

fisherman's hat. The role is well suited for Depp, a

master of the eerie and obscene. He plays

Thompson as very paranoid, schizophrenic and

never seen without a cigarette in his mouth. Benicio

del Toro is almost as insane as Gonzo, a very, lets

a new car and sleaze his way out of paying

for the hotel room. Other notables include Tobey

Maguire, even though he shows up for about 10

minutes of screen time as a blonde hitchhiker the

pair pick up on the Strip and Christina Ricci as a

teenage artist that Gonzo takes an interest in.

seen all over this film. Thompson's work could not

have been in better hands. Every drug fueled

with some sort of magic fueling it. Many

complain that the film is extremely convoluted and

confusing. Well, that's exactly what it wants. It is,

by the way, a comment on the drug culture of the

70s. What did you expectfrom the poster? A road

trip through the French countryside? Right.


Other noteworthy elements include the dialogue,

effects, bending the world to Gilliam and

Thompson's likings, the soundtrack, that features a

variety of music ranging from Wayne Newton to

Tom Jones and the screenplay, that has Depp and

del Toro darting around Vegas ever vigilant and

paranoid. But mostly, I highly recommend this film

for the utter uniqueness alone. You will NEVER see

anything quite like it in your life time, so go to

Blockbuster, grab your bat swatter and ether and 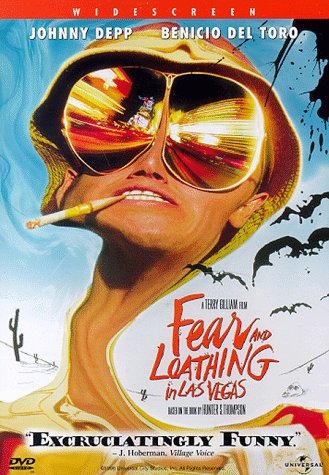