Long May She Reign by Rhiannon Thomas | Teen Ink

Long May She Reign by Rhiannon Thomas

The kingdom is only as good as its noble men and women, was the common way people had thought. The King is great, he runs the country and makes most of the financing, the Queen’s job is to look pretty at his side, and most people adore the prince or princess. Then it was the noble men and women who truly did not have a job, besides pretending to be important. They were the people of the court, used to show off how wealthy the kingdom was with their elaborate dresses and thick jewelry. They had some purpose, though, as they themselves or their children made were in line for the throne if something happened to the King and his decedents. Until then, though, life was fabulous, the dresses, parties, and not to mention the gossips, as the women and men flaunt themselves trying by wit to move up into the lines, hoping to be the next in line.

Freya, a daughter of a noble woman and a merchant father, knew lost at a very young age, as her mother passed away when she was young. Her father, Titus Nystrom, spent his time proving himself, as he was a noble by marriage, and try to make people forget that he was not raised with them all along. Being the King’s fourth cousin remove, Freya finds herself to be the court laughingstock, as were the other girls wanted to talk about dresses, she was a woman of science, who never knew when to keep her mouth shut. Being twenty third in line for the throne (knowing no one in their wildest dreams would put her in charge) had the dream to leave the kingdom as soon as she could, taking her one friend, Naomi, with her, and escape Epria (that is the name of the kingdom) and everyone in it. Until that time came, Freya and the rest of the court had to attend King Jorgen birthday celebrations. Stuck with an idea in the middle of the event, Freya and Naomi rush off to her lab only to be interrupted by her father and place guards who take her to the King’s hideaway fort. The King’s gold cake, which he ordered specifically for himself, contained arsenic, killing himself, his wife, and almost all the nobles except those who did not eat the cake. Those members included Freya’s father, some of the advisors, his bastard son: William Fitrzroy, Naomi, and Freya. With the first twenty-two dead, Freya finds herself to be Queen of a kingdom that did not want her. Rushed into a role she never wanted Freya has to convince the people that she is the rightful queen, and not let her mouth run her into the ground. This fantasy story takes a mystery twist as Freya was determined to find out who killed four hundred noblemen including the King and Queen. In a place where she could not trust anyone, not her advisors, not her father, not even William, who is after one thing only: her heart.

Rhiannon Thomas took a character who did not fit her world and forces her into the positions she never wanted. Freya, a woman of science, who rather be in her lab than in court, was named Queen after the twenty-two people in front of her for the throne died from eating arsenic golden cake. Freya, determined not to let four hundred deaths go in vain, must find the murderer alone as the whole court does not recognize her as Queen. The one thing Thomas has which could have been a really cool concept if she used it properly was the Forgotten. The Forgotten was the people who made their kingdom, their gods as you would say, who one day were to return to the kingdom. That is all I can tell you because that is all I understood about the Forgotten, as besides, there was about five of them, was all Thomas gave up on them. Still Freya was a lovable character, and with a quick pace and heart thumping romance between her and Williams, who is the hottest and cold character in this story, Freya uses her wits (and surprisingly well known knowledge about arsenic) to find her killer, and catch them gold handed. 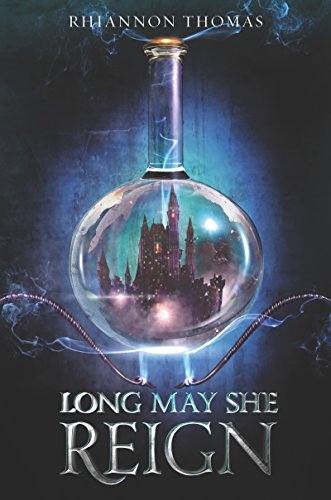 She never wanted this