The Walls Around Us by Nova Ren Suma | Teen Ink

The Walls Around Us by Nova Ren Suma

Deep down, we all have built up walls around us, but some have higher walls than others. For Violet, a prima ballerina, the world thinks she has it all as she packs to head to Juilliard. For Amber, the world thinks that she’s a murderer. Being locked up in Aurora Hills surely shows the justice system deemed her guilty, but is she? Tying the two girls together, Violet and Amber both are influenced by innocent, or not-so-innocent, Orianna. Each girl has the walls around them built up, but they are soon to come crashing down when the truth begins to inch its way out.


The Walls Around Us by Nova Ren Suma tells the story about three girls, but only focuses on two perspectives- Violet’s and Amber’s. Some authors can write about a character and some can write AS the character. Fortunately for the reader, Nova Ren Suma is one of the rare few in the latter group and can truly embrace the character’s voice as her own. From the first few pages, her distinctive writing style is evident as it truly captures the reader and providing them with enough detail and emotions to feel truly part of the situations that unfold.
One of the best parts of the book is that she creates a character that you love to hate- Violet. As a ballerina myself, I wanted to love Violet, but her personality does not match the face she puts on for the audience when on stage. From the first few glimpses from her perspective, Violet comes off as pretentious. Hailing from a rich background, we begin to piece together what truly has given her such arrogance in her abilities. Throughout the book, her character is developed as to see why she is the way she is, but it does not excuse her behavior. It is one of those characters that you can pity, but can see how holding onto bitterness can turn oneself bitter too.


Another big component of the book deals with a juvenile correctional center- Aurora Hills. Along with the juvenile center, we glimpse the view of the justice system from the perspectives of those that it failed- those deemed guilty. One cocky comment from Violet is that due to her wealth, she would never end up in jail. At a time in America when police tensions are high, everyone can relate. The innocent victims that have been killed, such as Trayvon Martin or Eric Gartner or Mike Brown, did not come from wealth. Like the characters in the book, they all saw how the justice system is flawed and faced unfair treatment. In a time where people are divided over the American judicial system, this novel speaks volumes, despite it being based off of teenage girls.


My favorite theme is the book is the concept of friendship. For once, there is a book with no focus on relationships; there are no love triangles; there are no “bad boys” that the girls swoon over. Instead, the concept of friendship is explored through each interaction among the girls. Does helping a person deserve loyalty in the future? The answers would vary based on who you talk to, but for Orianna, loyalty is the best quality and even her fatal flaw.


I love how The Walls Around Us created such an intense and haunting tale that is unique and not like any book I’ve read before. Its unique perspective and components set such a high standard, that few books can match. Nova Ren Suma has successfully crafted a novel that will stay ingrained in my brain for years to come, which is why it is the best book I’ve read from 2015 so far. If you’re interested in innocence and guilt, friendship and loyalty, and the essence that makes us each unique, this book needs to find its way to your bookshelf immediately. 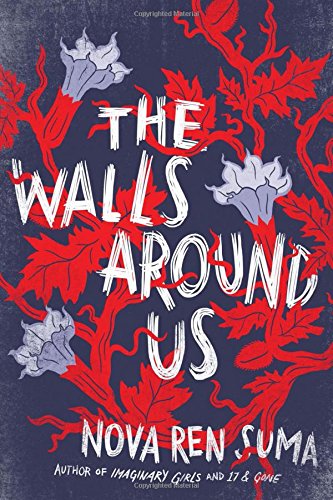 Favorite Quote:
"A cynical young person is almost the saddest sight to see, because it means that he or she has gone from knowing nothing to believing nothing." - Maya Angelou

View profile
I really liked this book, which is pretty special for me. I'd highly recommend it. My favorite thing was how the suspense kept building.